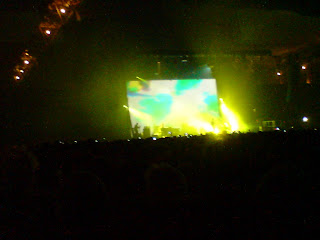 Last night I was in Alexandra Palace to see a band: majestic soundscape, incomprehensible high-pitched lyrics, a Les Paul played with a violin bow... could it be? No, not an impromptu Led Zeppelin reunion, but those doyens of ambient music and the current coolest Scandinavian band on the planet - Sigur Rós. Of course the lyrics were only incomprehensible as I don't actually speak Icelandic, and I must confess to being pretty much a Sigur Rós virgin.

As mentioned the setting was Alexandra Palace, and it has been a while since I was there last. Considering how cold it was, it was great that they had a continuous loop of courtesy buses to ship the (mostly young and European, if I'm not mistaken) audience to the venue. A couple of queues aside it was a mostly painless process and even the buy-your-tokens-here-swap-them-for-booze-over-there system at the bar was tolerable.

The band themselves arrived unheralded (apart from bi-lingual roadies testing mics in Icelandic - "einn, tveir, einn, tveir anyone?") and the previously described music commenced. The backdrop for the band appeared to be a series of over-sized Chinese lanterns (presumably from Ikea), which glowed ominously in time with the sounds. There was no video screens in the traditional sense but the band and various other images were converted into a kind of pseudo-art and projected from time to time. I have to say the effect was about right, and I imagine if I had been on something stronger than white wine I would have been utterly swept away by it all. The music itself was weird without ever being unbearable, and there were some particularly cinematic moments that had me tapping my feet and nodding in approval. Since I'm not familiar with songs themselves I can't say a lot more, and have no idea what they actually played, but I enjoyed the experience. They also did some unusual things with smoke and lights, and the waterfall and snow effects were quite wonderful and, since I do love a good visual/sound combination, my highlights of the night.

Musical mention this week must also go to Wayne Myers who played at the Blag Club on Wednesday. This Sunday I'm off to see Uriah Heap, now there's a band for ya!

I must also take this opportunity to congratulate Peachy on the birth of her baby boy - Harry Peach (7lbs 12oz) on Tuesday this week. Lots of love and best wishes to you both.

Oh, and while I think of it... stick the date Sunday 1st February in your diary, more details to follow.