God of Fire, Queen of the Skies

Those that know me well may have noticed that recently I’ve become more than a little obsessed. Something has eked into my consciousness in a way that I’ve not known in many years. It has got to a point where I am now urgently checking maps, Twitter and phone apps to see if I can get another glimpse of her doing what she does best. I’ve been booking tickets to shows and glancing out of windows at random times, just in case she hoves into view.

I did catch a fleeting view of her from my garden a few weeks back and ended up calling out her name and pointing like an 8-year-old child. It's even got to the point that friends started to notice my feverish obsession and tried to sate my desire with pictures from magazines and books with lavish photo spreads.

My first attempt to see her put on a display was thwarted by a tragic and horrific accident only four miles from my house. Despite the terrible nature of it all and my deep sadness for those affected, a small part of my heart was aching that I wouldn’t get to see her in all her glory. 2015 is her swansong, her last season; perhaps every opportunity would somehow slip (or be unseemly ripped) from my fingers?

Finally, yesterday in drizzly Dunsfold I got to see her distinctive silhouette appear and my heart gave a little leap. Have you guessed what my object of my affection is yet? (No cheating now) Well here are some clues: she was born in 1960 (although her sisters appeared from 1952 onwards) weighs in at a mind-boggling 205,000 lbs, is 99 ft and 11in long and 111 ft wide and can shift this bulk at nearly the speed of sound. She is the last flying member of the Britain’s V-Bomber force, a guardian angel once ready at a few minutes notice to deliver the A-bomb in our name – she is Avro Vulcan XH558. 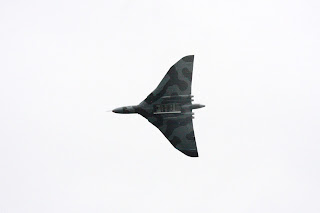 Few other planes have such a distinctive visage that the mere sight of them in the distance is enough to raise your heartbeat a notch or two. Avro’s other awesome creation (a mere 11 years before the Vulcan) the Lancaster has is, Concorde had it and (a step or two down) the marvellous pairing of Eurofighter Typhoon and Supermarine Spitfire at this year’s air shows has it. But for me the queen of the skies will always be the Vulcan.

It's sobering to think that only a few decades ago and armed with exotic, toxic and lethal loads with enigmatic names like Yellow Sun and Blue Steel these great dinosaurs of the air were a familiar sight in the skies over the airfields of Britain. Now she seems like a ghostly reminder of a time when engineering in Britain was state-of-the-art and nuclear oblivion was a very real fear for everyone. But what a ghost; arcing and banking and roaring her way past overhead. With a grace and power that belie her bulk. The display was simple yet magnificent. We saw her fly past undercarriage down, bomb bay open – she doesn’t have many tricks, but the few she has are so chest-thumpingly loud and so gob-smackingly graceful that it literally took my breath away.

When she finally turned that unique delta-wing profile heavenwards and gunned her four Roll-Royce Olympus engines one last time to power climb away I definitely felt a tear in my eye and a pang in my heart. You’ll forgive me, perhaps, if I eulogise just a little. She is one of the most beautiful things I have ever had the privilege to see, right up there with all the memories that will burn the longest in my retinas. It’s an incredible tribute to all those who designed, flew and restored her that she still steals the show wherever she goes.

Don’t miss this last chance to catch a glimpse. At the end of this year she’ll stop flying forever, so do not hesitate. I for one am glad to have made her acquaintance, but if I can figure out one last chance to gaze wide eyed and open mouthed, then believe me, I’ll be there. 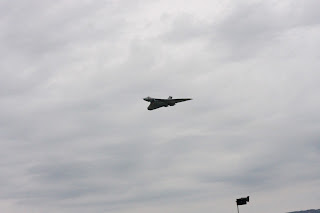 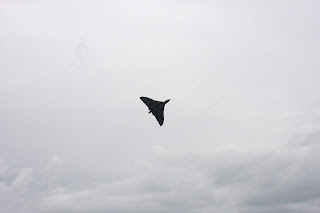 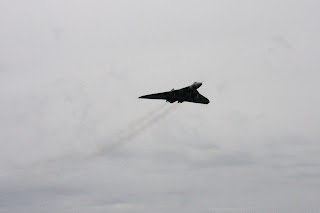 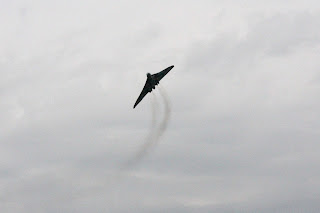 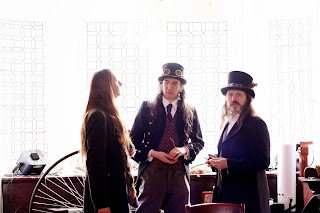 So what exactly is Steampunk? Well that’s kind of hard to say, but believe me you’ll know it when you see it. From my limited exposure to it I would describe it as a revisionist alternative future dreamed up from the mind of HG Wells and other authors of the period. Imagine the future as the Victorian eccentrics would have envisioned it. Madcap inventors, fearless explorers, quintessentially English nutters and so forth. In practice it’s a great excuse to dress up, not that we seem to need one. Costumes are lovingly crafted from a combination of theatre costumes, dressing up boxes and antique shops. Top hats must have elegantly worked bronze goggles; cuff-links and watches must be elaborate and needlessly complex. Skirts could be voluminous or airforce sharp depending on your preference, ray guns sit alongside blunderbusses to repel imminent alien invasion. The transport of choice is the propeller-powered airship, or the flying steam train. Are you getting the picture yet? 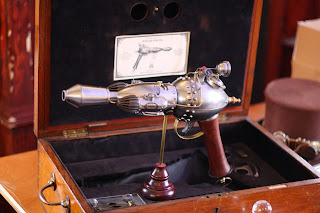 With all this in mind it was particularly surprising to me to wake up one morning with a fully formed Steampunk short story bubbling up in my mind like some mad professor's laboratory experiment. But what to do with such a volatile thing? Well there seemed to be no other possible course available to me other than to write the darn thing down and then find a suitable Steampunk convention at which to unleash it on a unsuspecting public. But where would one find such a thing?

Step forward the Surrey Steampunk Convivial, brain child of one Ben Henderson (who directed, shot and edited Charlie’s Superbad video and who is pictured centre above) amongst others and now a regular date on the Steampunk calendar. Said event it now bi-annual or is that twice a year? Well whichever is more often, which is the latter, I think. So, missive in hand fresh off the coal-powered steam typewriter, I duly presented myself at the first Convivial of 2015 (on 22nd February) somewhat nervous as to how I might be received. I shouldn’t have worried after all, it wasn’t called a Convivial for nothing, oh deary me no! Barely had I set foot over the threshold when I was engaged in a friendly game of Jenga with complete strangers, complete with an fascinating discussion of the merits of three legged tables of the kind with an additional appendage. This was fairly typical of a wonderful and most excellent day that included some rather marvellous models in the Steampunk museum (pictures above and below), pop-up shops of wonder and bric-a-brac to peruse. Costumes of eccentric invention caught the eye at every turn. I was glad that my story reading was pretty much the first thing on the agenda, allowing me a chance to relax following my performance and enjoy the many splendid wonders on offer. Chief amongst my favourite events of the day were a performance from the ever splendid Dead Victorians (bit of a throwback here, but Paul Tkachenko aka The Maestro from the DVs played bass on my original recording of Lightkeeper), who entertained with some of the rudest and non-PC music hall numbers you could care to hear. 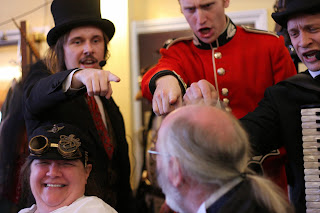 I also particularly enjoyed what is possibly the zenith of eccentricity – Tea Duelling! This turns out to be an archaic ritual basically consisting of dunking biscuits into cups of Earl Grey and attempting to out-wit your opponent by holding your nerve (and your biscuit) and consuming it whole before it crumbles. Yes it is as mad as it sounds. The prize for this worthy pursuit was the Nonsuch ashes (a burnt teabag) – but it was contested all the vigour and rivalry of chess grandmasters going head-to-head. In the end a Baron Munchausen look-a-like won the day, which seemed entirely fitting. 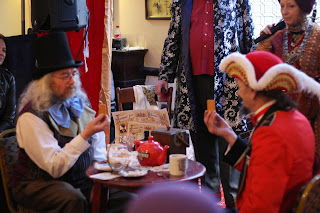 Following this there were other entertaining turns of opera singers, story-tellers and more musicians, and in the end I was sad to depart into the cold Surrey evening. Hopefully this humble description has whetted your appetite for what is fast becoming a national pastime. Perhaps you’d care to attend the next instalment; which is on 22nd and 23rd August. perhaps you’d also like to read my story. Well check out the first chapter here (drop me a line to get a copy of the whole thing) and let me know what you thought of the whole whizzo prang. 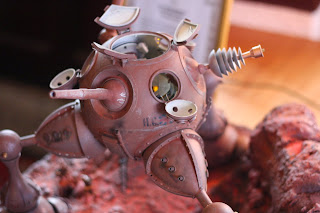 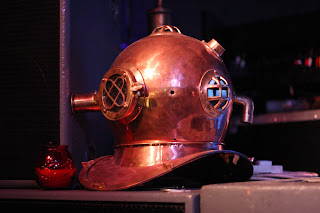