Me And The Monkey King I had a dream.

I was standing outside The Morrison hotel in Dublin. It was cool and breezy. The popstar Ian Brown was there, he was putting gravel on a light in the floor. He seemed very happy.

Then I was in a nightclub with more popstars and lots of people in sailor uniforms. I meet a guy called Mitch, he's a millionaire clothes store owner. He takes me to a secret place in the club and introduces me to the Irish mafia. I smoke a cigarette. He asks me if I'm gay or straight and then tells me how he cheated on his wife - I'm the only one he can tell.

Then I'm outside and eating a Burger King meal with a Kiwi and a dancer called Swan. It starts to rain heavily. So we walk the other way around the building to stay dry.

I'm back at the door of the hotel. Ian Brown is still there.

I go to bed and fall asleep. Cross and Cras in King's Cross (and St. Pancras) A weird thing happened to me on the tube home from Cross Kings in King's Cross on Sunday. A bizarre reflection occurrence meant that a man with a dark beard and bald head had said head transferred onto the body of a white tracksuit wearing lady... it was very odd and took me a good minute or two to work out what was going on.

I took the picture above too (a rare picture of me!!) and I love the fact that I've ended up being both cross and cras (sic). I was feeling kinda cross, although that might have been wine-rage, who knows.

The open mic night at Cross Kings is great fun (oh and happy 1st birthday to you all as well... well done David Goo for lasting that long!) but also very frustrating. I saw some excellent acts (stand up Laura Younger, Liz Arcane and Sam from Twickenham), and some bewildering and beautifully British acts (stand up Todger! No one got my joke when I kept shouting "Release Todger!" and then found it rib-achingly amusing.
Posted by Daren at 9:57 AM 4 comments:

There are lots of good things happening in my music world...

2) I'm putting together an exciting new band with my brother and a sensational young bassist called James Gruber. Some clips of rehearsals to follow soon - stay tuned!

3) The PSBs continue to tour despite a few date changes Yup, I'm back on tour with the fabulous Pet Shop Boys! Have I missed it? Hell yeah. All the guys on this tour are fantastic, and I'd rather be here than petty much anywhere else... but I nearly wasn't "here".

We flew out to Madrid fine, but then encountered the baggage reclaim at Madrid airport. It's not slow, particularly, but it's a very big airport and it just takes time for the bags to arrive, and we had a train to catch. We split up, NT and the tour manager in one car and the crew in a bus. Guess who got to the station first (and on time), yeah us in the bus. Guess who had the tickets, yeah the tour manager... in the car, which arrived late and we all missed the train. Ho hum, time for tapas and a glass of wine. We'll be on the next train, no doubt. Except the next train is full, so... 8 people get on the 20.08 and the remaining 5 have to get the 21.30... that's me, in case you hadn't guessed. Not a great hardship as it meant a taxi ride to Plaza Major and a meal on the management. I have to say I'm still in awe of having dinner with a world famous popstar... I should be getting used to it by now. Just call me a kid at heart.

Lovely trains in Spain, btw. We passed the journey (at 300 Km/H) doing crosswords and drinking red wine, bus to the hotel, and here I am... blogging again... Suede playing and another vodka calling from the minibar... hard life, huh?

What's Missing From This Picture? 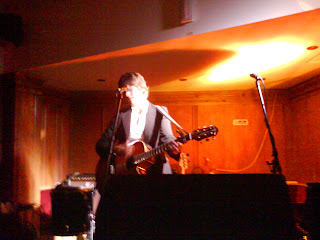 A new venue last night - Leonards in Farringdon - two stages one with a heavy rock band or two and one with the "acoustic" acts - almost a festival vibe. I was just glad that the Prodigy didn't come on in the big tent while I was playing!

First up was Tiger Lily, who played well and had some interesting songs. Then it was Tony (My Sweet Idiom? Not sure that's right, see pic). Truly lovely guy with a distinct voice and a great sounding Epiphone Firebird, but very depressing songs!! Then it was Charlie Savigar who has a great voice and some catchy tunes, good guitar player too.

After that it was Mr. Limbic And The Whole Damn System who comprised a laptop, funky guitarist and bassist and a chap singing, making funny noises and playing percussion. Interesting mix that somehow managed to be very slightly less than the sum of it's parts, but hats off for being different and playing well. Actually having said that, everyone played well, so hats off all round.

Finally, at 10pm, it was my turn, and despite being pretty tired I think I did well. I even managed to squeeze in 6 songs (All I Want is You, I Need Your Love, Tomorrow, Vulnerable, Lightkeeper and Do You Want To Dance?). I was heartened by a couple of people saying my set was strong, including a guy that said he saw a lot of live music.

So a pretty good night you would think, well what was missing from this picture?

Ah, an audience maybe?! Well you can't win them all.

P.S. Many thanks to James and Alex for coming down, all the other acts for sticking around to hear my set (thank you, thank you) and Simon for doing the sound superbly.
Posted by Daren at 8:23 PM 5 comments:

Just Another Day At The Office Just when I thought I'd had my fill of surreal and (mostly) enjoyable evenings, another one has come bumbling along. Last night I thought I'd try the open mic evening at The Cross Kings in, erm... yeah, you guessed it, King's Cross. By reputation this is a good night with a good host and nice P.A. My friend was playing piano between acts and I wanted to check that out too.

I was very tired from the goings-on on Saturday (see below), but I made my way down and found the venue easily. First impressions were very good. The bar has friendly staff and is decorated in a fun, bohemian style. The host, David Goo (great name), was friendly too and introduced himself as soon as he saw my guitar. The Sunday night consists of floorspots followed by booked acts, and promised to be great fun.

Floorspots kicked off at 7.30 with birthday boy Pete Scott, and I followed next. The venue was almost completely empty, but I'm used to those sorts of gigs, and it was a welcome relief after Saturday's boisturous punters. I played three songs, and my tiredness showed a little as there were a few small playing mistakes, but the vocals still sounded strong so I was pleased. Several more floorspots followed one of which was a friendly chap by the name of Edwin Addis, who I'd met previously at Edwards in Hammersmith. The venue was still empty, but we all tried our best and the standard was pretty high.

After the floorspots ended we went on to the booked acts, the first of which consisted of a cello player, violinist, percussionist and two female singers singing in some language that sounded a bit like Turkish, but could have been anything. In a slightly surreal twist about 80 people emerged, as if from nowhere, and packed out the entire venue. Where were they when the other acts were on?! Anyway, they seemed to enjoy the band they'd come to see and some even stuck around to see the next acts. These consisted of a couple in jeans and check shirts singing about how sick they made each other (kinda funny, but a bit lightweight), You And Me singing songs about the trivia of life (with a superstar recorder player... more on that in a minute) and Preacher Boy, who had come from the States and played Dobro steel guitar extremely well and sang pretty good. My friend Wayne Myers (Fit and the Conniptions) provided a variety of ivory-tinkling between acts.

I have to say that I was most excited by the recorder player for You And Me... who looked and sounded exactly like Keith from The Office (far left in the picture), and you know what? It WAS Keith from The Office, or more accurately Ewen MacIntosh who plays him. How cool is that?! I only wish I'd known for sure it was him when I was there, I would have got his autograph.

Who knows what will happen next? I've no idea, but I do know when "next" is, it's this Thursday at Leonards in Angel. See you there!!

Dxxx
Posted by Daren at 3:58 PM No comments: