What motivates someone to be in a rock and roll band so much that they are still doing it 25 years after the first chord is struck? Certainly an inclination to be “one louder” than my brother (he plays drums, very well it must be said) and definitely a desire to be attractive to the opposite sex (and possibly a few of the same sex too). But this isn’t a scientific thing; rock and roll is a primitive urge as much as it is anything quantifiable. More so, in fact, much more so.

I have a deeply formative memory that jumps to the very front of my mind. I’m the archetypal lost soul, wandering the utterly unromantic corridors of Harrow Weald Sixth Form College (it’s called something much more high-brow these days). Up on the first floor I pass the doors to the balcony of the assembly hall. Below there is a resident band playing who have clearly been granted permission to rehearse in that space. Said combo are named, somewhat unpromisingly, Jack The Biscuit and the Five Knuckle Shuffle (and this is 20 years before the Inbetweeners). But nevertheless my sleep-deprived and (frequently) confused adolescent brain is drawn to the crack in the doors to listen, and listen, and to love the idea of rock and roll music and the raw excitement it ferments inside me. And the song they were playing that moved my spirit so much…

…Back On The Chain Gang by The Pretenders. Thus begins a journey that takes me, musically speaking (and occasionally literally), all over the world. In pursuit of “that song” or “that riff” that makes my stone cold heart sing or my two left feet shuffle. That particular song will always hold an almost spiritual place in my musical memory. A small ray of light in a bleak epoch. Typically of me, I knew neither the original band nor the song and had to figure it out over time (no internet in those days). I was also convinced for a while that The Pretenders had covered it, as it felt like an older tune to me for some reason. Mind you it was released in 1982 and I recall hearing it first age 16 or 17 in 1985, practically an age later. A further year removed, in 1986, I played my first gig in a rock outfit – but more on that another time. The more I think about it, the more I can’t escape the thought - it was The Pretenders wot did it your honour.

For the record, my favourite song of theirs is Middle Of The Road which becomes more and more apt by the day.

Oh wait, I almost forgot. The entire reason for this post is that we’ve just recorded a Pretenders' cover for a friend’s birthday. 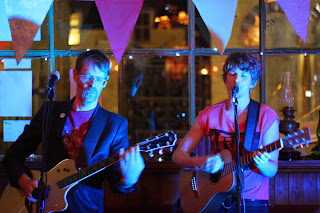 For a couple of days we headed to the south coast of this fair isle for a fact-finding trip, and a jolly good time in the bargain. The idea was to explore some areas of the city as potential settling grounds and also visit some of the local open mic nights to see the lay of the musical landscape. You cannot move for open mic nights in Brighton, every pub I passed seemed to have an evening for aspiring songwriters advertised (at some point in the future I have a bit of a rant about this, as open mic seems to have replaced paid gigs for musicians almost completely, but for now I’ll save it). We were fortunate that we had a steer from a (temporary) Brighton resident who suggested a couple of the best events to attend on our two evenings in town, thanks Jess!

With this good information we headed to The Hop Poles (on Middle Street) on the Tuesday night. This was a splendid and very busy evening, so busy in fact that we had to retire to the small pub garden until there was space for us all to fit into the main pub. The standard of acts was very high and with pre-booked slots there was no bun fight for positions, which made for a very relaxed atmosphere. Our slot was fairly late, 10.45pm but pre-armed with this information meant we could pace our evening and really enjoy our set of 3 songs. We went fairly upbeat and this worked very well. Overall we were well looked after and the sound and gig photos (a good bonus for acts) were all excellent. Jess, our partner in crime, played just before us and her songs were beautiful and well received.

The second of our two appearances on the Wednesday was a very different affair. The Bee’s Mouth (on Western Road) is a hidden doorway between two kebab shops, but this unpromising start reveals a wonderfully eclectic pub, cinema and music venue over several, narrow, levels. The location of the open mic was the very lowest floor and on arrival we found it filling up already. Much shuffling of guitars and bums was required as people came and went over the night. The room itself was dimly lit and adorned with posters of various spiritual and magic acts (David Devant?) giving a spooky backdrop. Nevertheless everyone was very friendly and the acts came and went fairly swiftly as this time it was just 2 songs per person. We were one of a couple of duos that night and really enjoyed our playing and our free drinks (one per artist) very much.

Overall we felt that our very small toe in the Brighton musical waters revealed a very friendly and fun scene. Acts were diverse and, generally, of a very high standard. We look forward to spending more time there and getting to know the best places to play and people to know. See you again soon. 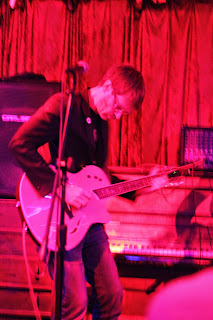