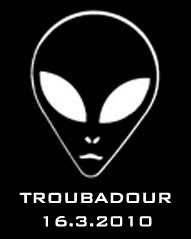 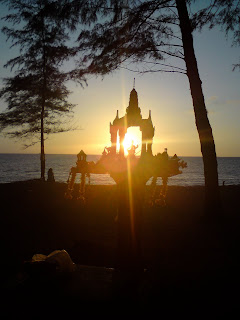 Kuwait airport only has three places to eat: Cafe Costa, Pizza Hut and, yes, McDonald's. Is this the price of liberation?

I love the Airbus 340 - very smooth plane. I actually slept fairly well on the way to Bangkok. I was awakened by a voice I thought they were calling my name, turns out they were saying "hot towel?". Still not a bad way to wake up.

There can't really be any reason why we can't use mobile phones on planes, otherwise terrorists wouldn't need to worry about all those, frankly dangerous, bombs. They could just call up auntie during take-off and cause untold chaos the world over. I for one though am glad for a little respite from the intrusive little buggers.

We lit a fire under a small balloon and watched as it slowly floated off into the Thai night sky. It's orange glow burning like a fiery star looking down on us. Mars too added it's angry red glow to the firmament. The light of the fragile balloon and the mighty god of war appeared much the same as they twinkled above us.

The moon was full and directly above me as I reclined by the pool. I was even more thrilled to know that the full awesome mass of the sun was directly below me, beneath the whole globe of the earth.

Lucy the babysitter returned scared. Up the road from our hotel there is a area of road patrolled by several dogs, they seemed reluctant to let her pass so she returned for help. It fell to me to perform some sort of masculine duty. We started off bravely enough, but after the first dog began to bark violently others joined in from all directions. These dogs were not on leashes either and, egging each other on, began to advance on us, Lucy hanging on to my arm for grim death. When one actually decided to lunge at us I saw my life flash before my eyes. I willed us on with the calmest wrds I could find, don't look directly at them or make and challenge, keep moving. Eventually, my heart tearing at my chest, we left their territory and the barking slowly diminished. We breathed again. A little disorientated it took two goes to find the right house (with more dogs), Lucy was safe, but it dawned on me that I had to walk back past the hounds alone! She walked me back to the junction I needed, are you married? she asked me.

Phuket town has a Tesco and a shopping centre. As if to remind me of Croydon, it's called Central.

Surin is just as expensive as London.

Bangkok has a most delicious mixture of old and new. From the ornate and noisy, yet wonderfully baroque Tuk Tuks, to the glittering skyscrapers.
Posted by Daren at 7:34 PM 2 comments: