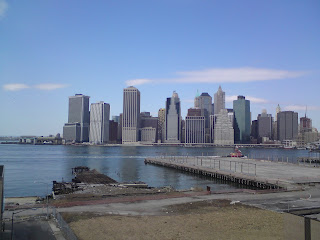 Jet lag is real - I know, I'm feeling it right now. Monday night I flew the red eye back from Newark, NY and, despite having a full row of four seats to myself, got no sleep whatsoever. I did try, but a crying baby and proximity to the loo made it impossible. Still it was a novelty to be entirely horizontal on a jet plane - now I know how the first class passengers feel (they have some very natty bed/chair type thingies these days).

New York was good fun. It was fantastic to see Alex again, and I enjoyed staying in Brooklyn and traveling around different parts of the city on the subway. I really like New York, it's probably my third favourite city in the world (after London and Paris) and particular highlights this time were walking in Brooklyn Heights (great view of Manhattan), viewing art in Chelsea (Deitch Projects is always interesting), eating in 'the only diner in LIC' (that's Long Island City of course) and catching a funky Brazilian influenced jazz band in the West Village. I have to confess that I didn't make it to any open mic nights (boo!) - preferring instead to have a break from playing - which has really energised me for more gigs here.

After arriving home on Tuesday morning I got a text from my friend Wayne reminding me that it was Hadar Manor's album launch at the 12 Bar Club that night! Well I um'd and ah'd for about half an hour before deciding that I might as well fight the fatigue and go anyway. I have to say I am very glad I did. The 12 Bar Club is a very strange venue which used to be an old forge or something, and it's very hard to see some of the acts due to the close proximity of stage and balcony. All the same it was a very special night. The warm-up acts included a bagpipe player, a harpist, and several singer-songwriters who were all excellent. Hadar sat in with most of them, and I began to wonder how her set could match up - but I needn't have worried. When she finally took to the stage with her band (a little later than advertised) they produced one of the finest live performances I think I have ever seen. With the peerless Wayne Myers on guitar and Tom Fry on bass (sorry, don't know the drummer's name, but he was excellent too - AND he had a nice hat) they were joined by a succession of other musicians. Violin, trumpet, vocals, percussion, harp, keyboards and guitar accompanied a wonderful set that covered all the emotions and was constantly entertaining. 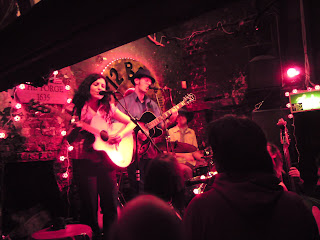 (Pictured are Hadar Manor, Wayne Myers on guitar, drummer in nice hat and you can just about see Tom Fry on right of the shot)

Tiredness overtook me rapidly after Hadar finished so I headed home in a drowsy (but happy) haze.

I finally fell asleep at about midnight...

Somehow, despite all this sleep/music induced euphoria, I managed to practice for tonight's gig at the White Hart in Whitechapel. It's easy to get to, just take a tube to Whitechapel station, turn left as you exit and walk up to Mile End Road... the venue is upstairs. There is music tonight from 7.30pm (open mic, including my mate Ashley Cowen) and then featured acts from 9.00pm - I'm due onstage at 9.30pm and will be off half an hour later so don't be late!!

I can promise some looped delights, weird vocals and carefully crafted songs both old and new... and that's just me! 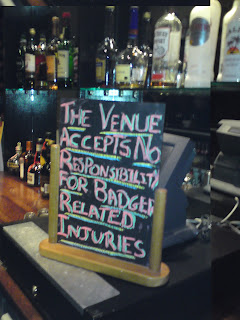 I have to say I really enjoy playing genuine "unplugged" gigs. I'm sure that some performers hearts sink when they see that there is no amplifier or microphone to use, but actually I find it very exciting. There is a rawness and emotional connection that you get when the music from your guitar and mouth are reaching the people sitting before you directly. It has the added advantage of meaning that the audience has to remain quiet in order to hear the songs and this allows you to use playing dynamics and your vocal range freely.

I have just done such a gig at The Jago in Shoreditch. It was an electric (!) night of spoken word, poetry and music in an intimate and enjoyable setting. I particularly enjoyed the work of John Zammit, Andreas, the singing bouncer (who came in, sung one number beautifully and then left to go back to work!), Failed Hearts (part blues, part punk - nice harp playing), Trinity (the DJ, who played real vinyl and some of my favourite tunes - Supertramp anyone?) and the co-hosts David Amery and Jazzman John Clarke. I sold a good number of CDs, including one to a lady who wanted me to sing her a cover song before parting with her cash. In the end I managed a pretty reasonable version of California Dreamin' and the deal was done. I played 6 songs in total and the night comes highly recommended: it's the first Saturday of every month (so also a rare weekend gig) and I'm back there to play again on the 4th April.

I've got some really exciting gigs coming up, in north, south, east and west London, Guildford, St. Albans and (possibly) New York. Plus, this coming Saturday is the excellent Fiestival in Chatham, Kent. Expect lots of mexican themed songs and performances and lots of latin-American themed fun. I'm also back at the Montague Arms this Thursday (12th March) - this time performing a one-off interpretation of one of Daniel Lehan's art pieces. This really is a one-off, if you are not there, you will not experience it! In fact there are so many gigs that I can't really do them justice here, and I don't always have the time to promote every gig properly, so PLEASE go to my gigs page on my website and scan the list, find one near you and COME ON DOWN!

If you haven't yet taken advantage of the free downloads from the site, then I would swing by there too and grab anything you like. I'm about to record some new songs and review what is available for free, and what I will be charging for: so get in there now!!

Have a great week.

P.S. The photograph is from the excellent Powers venue in Kilburn, I'm back there for a featured set on the 15th April. Perhaps the Angry Badger has been down that way.
Posted by Daren at 12:19 PM No comments:

A Song About Pain 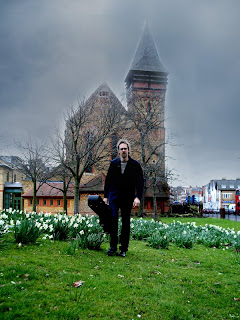 There is a lot of pain around in life: the pain of loss, of separation, of illness. But can there be times when pain is a good thing? It warns us of problems, reminds us we are alive and some people enjoy the way it can mingle deliciously with pleasure. Some people mistake pain for love. Chastisement for devotion. All I know is that it is necessary, sometimes healthy and mildy addictive.

Am I a pain junky?

No idea, but here is a song wot I wrote about it.

Oh, and you can hear how it sounds right here:

It's dedicated to all my friends in Blog world and real life, who like to invite a little pain into their lives from time to time - you know who you are.

P.S. I love the picture on this post taken by the excellent Kris Gruber. I will send a signed CD of this song and a few others to whoever can get closest to guessing where it was taken. Nearest guess (as measured on Google Earth) wins.
Posted by Daren at 2:30 PM 6 comments: