Radio, Someone Still Loves You. 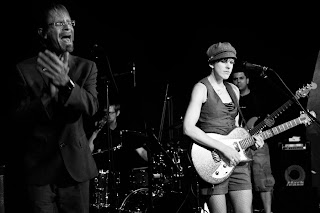 When Queen wrote Radio Ga Ga, I feel that they were predicting the decline of the radio in the face of all-singing, all-dancing television. But they missed the mark somewhat as they didn't realise the effect that the internet would have. In much the same way as the internet has let unsigned artists reach fans all around the world, this global reach has enabled local and community radio to reach far wider and expand their audience. So it is that being interviewed or featured on local radio is now not the parochial experience it once was. Listeners from some very far-flung places can be tuning in, so it's always something that I really enjoy.

Following on from me and Charlie both being featured by our friend Lee Robson on Reach On Air a few months back, we have both been on shows again recently. Another friend - Acoustic Ashley Cowan - asked if he could feature Dare To Be Charlie on his Open Mic show for Sydenham Radio. We jumped at the chance, and he duly came to our gig at Babalou in Brixton with a microphone and a few questions. The talk ranged from advice to unsigned acts (and musical couples!!) to thoughts on use of effects in shows. It came out really well and hear the whole of Ashley's show on Vimeo. It's a good show with some interesting poetry and music and other features too, so do check it out. Our part is around 50 minutes in, and features a little of our songs Dance and Wash too.

The second show I have been interviewed for was a real treat. A few weeks back my dad was interviewed for Radio Verulam for a show hosted by Elspeth Jackman called Tracks Of Your Life. The premise is that, a little like Desert Island Discs, interviewee selects a number of records that have a meaning to them and talk about them with Elspeth. My dad's own show was a fascinating glimpse into his life, which I found both interesting and enlightening listen. It's also a fantastic record for future generations to hear what my dad thought about various periods of his life. My dad recommended that I should be featured on the show and I duly made the trip up to Smallford near St. Albans to record my show. It was really fun to choose 16 songs that had meaning to me through my life, and I really tried to find songs from every period rather than just concentrate on the more obvious choices. My dad had taken us on a musical trip through his whole life to date and I'd presumed that my show would follow the same lines. In the end though, although I did present the songs in chronological order, our discussion focussed more on popular music and song-writing rather than a dissection of my life. I had great fun making it with Elspeth, who is a very good radio host, and if you'd like to hear it then you can very soon.

The show will be broadcast on Radio Verulam Sunday 8th August from 10am - 12noon. You can tune in on line by visiting their website, or if you live in the St. Albans area you can tune in the old-fashioned way on 92.6FM. The show features tracks by my old bands Air and Normal, and also Charlie Savigar and Dare To Be Charlie as well as a selection of songs that have meant something to me over the course of my life. I hope you enjoy it, and many thanks to Elspeth for inviting me to take part!

It's quite likely that you will very soon have a chance to hear a live Dare To Be Charlie gig over the internet, but in the mean time you can catch us live at the following fabulous venues:

The last of these gigs might well be a debut for the full band line-up of Dare To Be Charllie - featuring Haydn Callow on drums and Wayne Myers on bass!! Stay tuned for more information on that.

Today's picture was from Charlie's excellent show at The Bedford in Balham taken by Annelie Rosencrantz. Look out for more pictures from this show on our various websites.