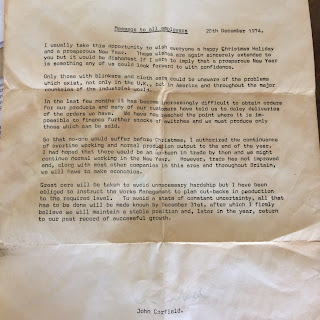 In the aftermath of the referendum I have been told by more than one person that they have an advantage over younger voters in that they can "Remember a time before the EU".  Well it only occurred to me the other day that I too can remember a time before the EU (or us joining the EEC to be technically correct).  So just for the record here is the pre-EEC (and early EEC) Britain that I remember.

Despite being exceptionally well educated (6 A-Levels, degree & PhD) my dad had to travel to the north of England, away from his family (who mostly still live in Bournemouth) and my mum's family (still mostly in Kent) in the south to find work.  This is the reason why in the twilight of 1968 I was born in Cheshire, many miles away from the rest of our clan, and spent a big chunk of my childhood there or in Liverpool.  This is something that has dogged me for my whole life and makes it very hard to answer the random question "Where are you from?"  My brother was also born in Cheshire, but to add even further symbolism he was born IN A BLACKOUT!

We were relatively poor (compared with today) through most of my childhood, many early Christmases we had homemade toys rather than shop bought gifts.  Now don't get me wrong, we were very happy kids and a bit of homemade creativity goes a very long way.  But how lucky are we now that we can choose to make a homemade gift for our children rather than having no option?  Those that know me well will be aware that the lack of a Millennium Falcon plastic toy has haunted me my whole life.  Of course that was a little bit later on by which time our joining the EEC had begun to pick up Britain's sagging economy that was struggling to move on from it's industrial roots.  Britain was a country with many economic migrants, but they were mostly British people with no choice but to move around the country (or, after we joined the EEC, abroad to the resurgent economies of Germany and Spain) to find work and support their families.  I've mentioned Auf Wiedersehen Pet before, so will refrain from banging on, but there seems to be a collective failure of memory that this was the situation, and how the EEC helped improve it.

Eventually the recovering economy brought relocation after relocation for us as first dad and then mum moved to get work closer to the capital.  My own friends were left far behind in a world where no email or social media meant it was harder than now to stay in touch.  I did used to write long letters to my best friend in Liverpool, but then he moved also for work and we began to drift apart.  Those of you lucky enough to have stayed in one area your whole life should remember that these days we can choose to move if we wish but, recently anyway, low unemployment has meant it's possible to find jobs without forced relocation.  Being close to your family and friends is something to be treasured.

So the pre-EU Britain that I remember is one of economic migration, (relative) poverty, strikes and blackouts.  A time when the scapegoats for much of this was the Irish and the blacks rather than eastern europeans and muslims, plus ça change as they probably don't say that much on the continent.  Not sure which bit of this is supposed to make me look forward to post EU life, but there you go.  Perhaps I'm missing the point and they are thinking fondly of the austerity of the 1950s and 1960s or the joyous time that was Europe in the 1930s and 1940s?!

It's my honest opinion that it is successive UK government's fault that the economic benefits of EEC membership where not shared more fairly around the country.  We are now a post-Industrial nation, and there seems to be precious little plan as to how we adapt to this changing world.  I'm sure there are people with some great ideas, but (and feel free to tell me I'm a numpty) a return to the 1970s surely isn't one of them.

POSTSCRIPT: I found the letter in the picture above in my dad's new garage in Chesham, a simple reminder that times were very hard before and just as the UK joined the EEC.
Posted by Daren at 9:40 AM 2 comments: