To Edinburgh and Beyond!

I spent a very pleasant weekend just gone in Edinburgh with my friends Frog & Victoria Morris and Mark Quinn. They were up there performing on the Fringe and their shows were going down really well. The main show that Frog & Mark were performing was the Unwrong Quiz (which you may remember from my multiple appearances at the Montague Arms) - now reworked for a one hour slot in a cellar. Between the rounds it's traditional to have some music. For the Edinburgh run this was provided by Frog's brother Theo Morris, and he was doing a splendid job with songs about genetically modified dogs and land enclosure acts. On the Sunday though, Theo fancied an afternoon off so I was very privileged to step into the breach and reprise my old role as the fill-in music. The show seemed to go really well and I think everyone was happy with my contribution. I have to say though, I was very disappointed to not win a marrow, or Pots! The Game, or even a Crunchie on a mop - oh well, perhaps next time.

Whilst up there I managed to catch a lot of comedians, including seeing Robin Ince for a couple of pounds. I also saw Steampunk strippers, burlesque, singers, the mighty Beta Males Picnic in the bunker, a spell-binding one man show called Bane (very cinema noir) and Frog bemusing an audience with existential art wrestling and Dave "Security" (lovely legs, lovely, lovely legs). I also got used as a keyboard stand! Unfortunately I didn't get to see Utter, Gutted the musical or Charlotte Young's show (Aude, Vide, Tace) - but I hear they are excellent - so go and see them to make up for my absence!! I even got a seat on the train home, so that was a bonus.

Some of you will probably know already that I'm off on the road with Katie Melua again in October for nearly three months! So here are the last few chances to catch me live before then. Do come along and hear my exciting (and fun) duo - Dare To Be Charlie or see me playing guitar with the other half of the duo: the excellent young singer-songwriter - Charlie Savigar:

Hope to see you at one of these gigs, otherwise, catch you on the road some time!

P.S. The Dare To Be Charlie MySpace is now live, do add us to your friends:
Posted by Daren at 10:34 AM 1 comment: 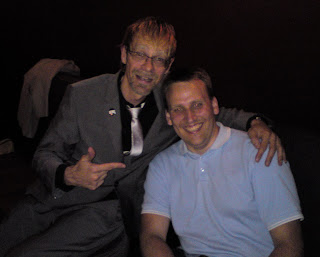 The internet is an amazing thing especially, it seems, for musicians who have many different ways to get their music to potential fans around the world. One site which is really good for this is Last FM, and a couple of years ago a chap from Sweden got in touch to say that he'd enjoyed listening to my music. You can still see his comment at the bottom of my profile from October 2008 - his username is Winterbay. Well this month he happened to be in London, and wanted to know if I was gigging. As I happened I wasn't, but it's easy enough to arrange something, so I booked Dare To Be Charlie in to play at the Elixir Bar last Tuesday. In the emails concerning this date it turned out that it was actually his Honeymoon!! So he had to get permission from his wife to come along!! It all turned out fine in the end and I met him and his new wife and it was a pleasure to play some songs for them and have a good chat afterwards. It was a really good gig for us, and it was made all the better that a friend from overseas was able to make it to listen. So many thanks for coming and your support over the last two years Peter (for that is his real name) - it was a pleasure to meet you and your wife and I hope you enjoyed the music as much in real life (as you say) as you did in cyberspace.

For those of you who are not in the UK, there is another chance to catch some off my own music, and also hear me talk about song-writing and some of the songs I've enjoyed over the years on Radio Verulam - tomorrow (Sunday) morning from 10am - 12noon. Tune in hear and catch the show:

There are also lots of exciting things happening with Charlie's music, so there will probably be another post to follow on that very soon. Plus, a bit shout out to Frog, Mark, Charlotte, Martin, Richard and Theo who are all in Edinburgh this week running or preparing their shows for the Edinburgh Fringe - good luck guys!!