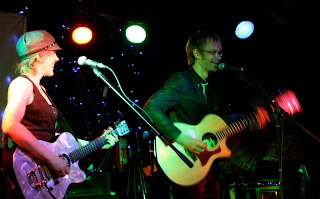 You've got to love my life sometimes. Yesterday I flew back out on tour again, this time with Katie Melua. This is for a series of Summer festivals and TV appearances in Europe and UK. We flew out from Heathrow yesterday and a particularly wonderful moment happened when we were waiting for our bags in Norway. One lady suddenly realised her enormous suitcase was passing by a little to quickly and rushed to get it. It was clear that she was going to struggle to haul it from the carousel. I was preparing myself to help when the man standing in front of me, none other than Dave Grohl of Nirvana and Foo Fighters, moved a little quicker and helped her remove the bag. In fact we had shared our flight out with all of Them Crooked Vultures - ie Josh Homme, Dave Grohl and John Paul Jones! Plus assorted other band members and crew, quite a collection of tattoos and sunglasses I have to say.

Being around all this rock royalty is very inspiring and it's sure to rub off on my next few performances. Most notably for those who haven't seen me for a while is the very new duo (soon to be band) that I have been gradually working on these last few months. This new act is called Dare To Be Charlie and is myself and fabulous singer-songwriter, guitarist and pianist - Charlie Savigar. We've done a few shows already and the feedback has been extremely positive. We're planning bigger and better things all the time and it really is worth coming to check us out as soon as you can. I can safely say that this is the most exciting musical project I have ever been involved in, and that's saying something!

As I say it's still early days, but check back here for more information as we go along. In the meantime do check out our website and the picture above taken by the wonderful Victoria Morris. Make sure you check out her Blog too: Mrs Frog Blogs.

Here are the dates when you can catch Dare To Be Charlie live:

I also now play guitar and sing with Charlie's band, featuring my brother - Haydn Callow - on drums too.

P.S. Oh, the Norwegian sing-a-long is the gig I'm working at tonight. A TV show in a hill fort in Halden, Norway. Apparantly the audience are expected to sing-a-long - sounds bonkers to me.
Posted by Daren at 8:58 AM 1 comment: