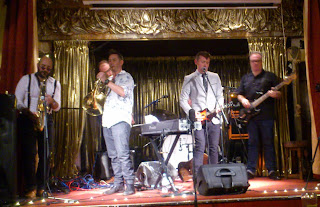 What better way to celebrate American Independence day could there be than seeing a quintessentially English pop act in an eccentric English boozer? Well that probably depends on your point of view, but I certainly could think of few better. So accompanied by an illustrious trio of artists: Daniel “Lord” Lehan, Charlie Fox (Laughing Bear retired, pictured at the end of this Blog) and Canadian Josée Dubeau I ventured through Nunhead to the really rather splendid Ivy House. I had never heard of the venue before this concert, but I was stunned by a wonderful, community-owned pub with a beautiful ballroom attached to the rear. The pictures don’t really do it justice; it’s well worth a visit just in it’s own right.

The band I was there to hear go by the near literally moniker of “Mikey Georgeson And The Civilised Scene” which might, of itself, not mean a great deal. However when I explain that Mikey is both “The Vessel” of David Devant And His Spirit Wife and also “Mr Solo”, things will become abundantly clearer. Or not. He’s on Wikipedia in case that helps, it probably doesn’t. Either way Mikey has thrown aside the towering wigs, capes and safari suits of yore and now presents a set of music very much “as himself”. Before all of that though and in a bold effort to return some much missed Buffon hair we were entertained by the tunes of the support act – Emily Capell And The Three Petes Suite (try saying that drunk!). Despite savage heat onstage Emily and her trilby & stripy Polo shirt attired band gave a good account of themselves with well observed, contemporary lyrics and dapper accompaniment, which at it’s best reminded me of The Specials with a modern lilt. 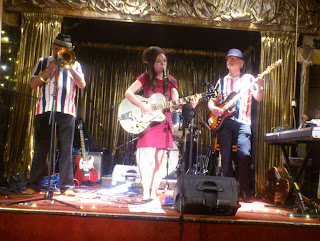 Mikey himself, resplendent in sharp blazer and tie, was fabulous. Accompanied by a hefty band, including brass and one of my favourite guitarists, the set was full of cracking pop tunes. From the opening of I See What You Did There through one of my all time favourite songs – Industry (I did a re-mix of this awesome song once) to whatever he finished with (sorry, I should have taken notes, but I was enjoying myself way too much). So hot was it that by the end of the evening Mikey had removed blazer and tie to throw Elvis like shapes across the gold lame stage with Ukelele and acoustic guitar. It was a most splendiferous spectacle, if I can say that? I can, I just did. In the end it was a gloriously English evening in the heart of metropolis and I, for one, enjoyed it greatly. Lord Lehan and myself felt moved enough to perform the “We are not worthy” moves from Wayne’s World, and indeed these Canadian-inspired references were the nearest we got to anything American on this special day for our cousins over t’pond.

Mikey’s records can be bought via iTunes and all the usual ways, although where all the money goes, nobody knows. By the way, if you ever need a second guitarist Mikey – I’m available. 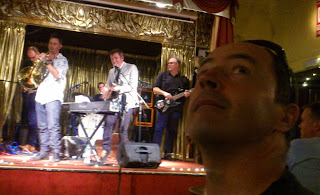 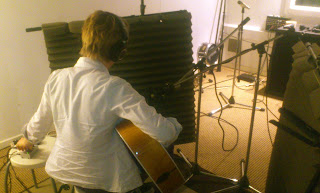 Now that I’m getting back into this Blogging thing, I realised I was very overdue with a review of the latest musical release that I’ve been intimately involved in. Namely, the debut album – Get In Line – by Country Rock chick: Charlie Savigar. This is a ten track offering which features my input on 9 of the 10 tracks. Rather than go into too much detail, I thought it might be good to give a few (hopefully) interesting facts about each song, and post the latest Promo videos which are yet to be featured here.

If you want to listen along to the tracks whilst reading my notes below, then you can stream the whole thing from Soundcloud, and if you wish to own it for yourself (and support an unsigned artist into the bargain) then you can download it from iTunes, or buy a physical copy from a gig. 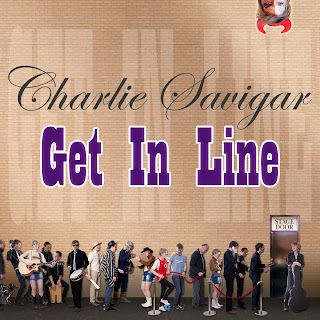 Get In Line
This is a firm favourite as a live track (we usually open the set with this) and a nice little rock-n-roll number. Originally the album was going to be called “My Journey” – but I thought this sounded a little passive, so I went through the songs on the album for potential alternative titles and realised that “Get In Line” worked just great. I also had the idea for the artwork that you see at the top of the post, with us all standing repeatedly in line. This was expertly shot by, great friend of the band, Kris Gruber at my dad’s house (the same location that the Superbad video, below, was shot. See picture at the bottom of the post for more of the line).

The drums for this were recorded in sessions with Tim Pennells. 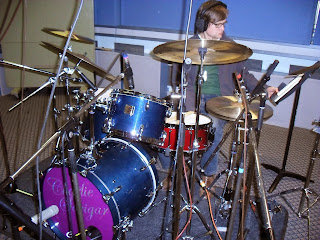 Save Your Love
The beginnings of this track predate everything else on the album by quite some way. Originally recorded in sessions with Gregg Jackman and Francis Rossi way back in 2006, it was put to one side for a while until Gregg suggested that it needed to be sped up a little. Which he proceeded to do in a very painstaking process in Logic. We then searched around for a suitably weird instrument for the intro, which we found in the shape of an oddball Washburn Rover travel guitar (see pic). Brass was supplied by Charlie’s friend Bridget Goodwin who’s favourite phrase during recording was “Just shoot me”!

This is the only track on the album that I didn’t play or sing on nor does my brother play the drums. Instead the drums were hit by Michael Kruk and the bass was added by Nicholas Rossi. Francis played the solo for this track on his distinctive customised Telecaster – in one take! 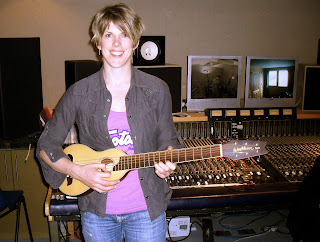 When Will You Learn?
One of my personal favourites from the album and a really great pop tune. It reminds me a little of some of Ray Davies songs.

Following The Signs
I actually recorded the first demo of this song, which is actually the version you can hear on the promo video. Gregg Jackman re-recorded the drums and possible the vocals too. Marc Wyburn supplied the electric violin.

The fun video has been featured before, but it’s well worth another look.

What's Your Name?
This is the slowest track on the album and we tried to get a more acoustic / Latin feel on this one. In the end Haydn recorded the drums playing the snare with his hands rather than brushes and sticks. There’s a little percussion loop in there and this is the only thing on the album that was not recorded specifically for it.

In order to play this track live Dan (Newell) has to switch from brushes, to one brush one stick, to full sticks and back to brushes again, it took a while to get the best version of this. The lead guitar line was played on a Taylor T5 through a tape echo simulator, which gives it that wobbly, in and out of phase sound.

Superbad
A great pop tune again, that’s great fun to play live. The video for this one was again shot at my dad’s house on a sweltering hot day. Performance artist – Frog Morris – did the background painting live and then sweated his behind off as the spaceman/robot. The video was directed, shot and edited by Ben Henderson. One other interesting fact is that Kris Gruber (who shot the Get In Line cover pictures) also helped out on the video, his hands are amongst those holding postcards. Our friend Daniel Baker also turns up as Superdude (with carefully disguised logo), everyone supplied their own costumes for this one. Both of our drummers, Haydn & Dan feature too as Bond and The Penguin respectively.

Adrenaline
The heaviest track on the album and one that was recorded pretty much all at our house. The drums were re-recorded by Gregg again, but otherwise it’s actually a home project. I’m very happy with the heavy rock sound we got on the guitars, although I couldn’t tell you now which guitar we used, possibly my Les Paul Custom. The video for this one was our lowest budget effort to date (less than £200) – it was written/directed by Frog Morris and filmed and edited by his brother Theo. We tried to mimic the beginning of the Long Way Home video at the start, before heading off into the woods.

Sell By Date
This is, probably, my favourite track on the album. It’s a quirky little number that bounces along rather pleasingly.

Long Way Home
This is another earlier recording from Francis Rossi’s studio. This was also my first studio experience of working with Charlie (I provided a few harmony woo hoos). The bass on this one was provided by Allen Sassani and the hillbilly guitar lines were played by Adam Wedd.

Although you can’t really tell from the finished work the drum track was mostly recorded in little 2 and 4 bar sections to make sure we got the killer version.

Dance
Finally the album is rounded off with another track that is mostly comprised of the demo recording. The slide guitar parts were all played on Charlie’s Tanglewood resonator.

Except where mentioned in the text all drums were played by Haydn Callow and bass by Alex Lofoco.

The Beast Of Camberwell 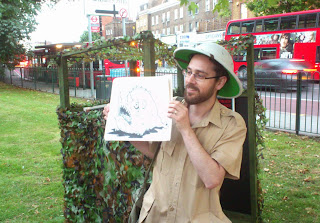 With great trepidation and heart very much in my mouth I, and a score of others, assembled to join the foray to seek, and possibly capture, the mythical beast of Camberwell Green. Professor Frog Morris over-excitable from a week of searching greeted us by his impressive hide, adorned with many helpful likenesses of the fiend and tales of his sightings. There were many questions as the motley band were first drilled in health and safety (none of us could see the fire exit) and then led a merry dance across the wastes of the Green to hear the various yarns associated with the foul apparition. A chipper few ventured their own possible sightings: on an omnibus here, in a greasy American chain food franchise there, but most scoffed nervously at such banter. Determined that our soiree not end in failure, Prof. Morris laid an intoxicating sheen of the beast’s favoured pheromones over his most likely emerging point (Eau de kebab much enjoyed by all, scent of curry less so), but to no avail although the tension was still palpable.

Then, when all had seemed forlorn and we had minded to disperse: SHOCK! HORROR!! The beast is spied and a “Tally ho” is raised in pursuit. Chaos ensued. A fearsome melee! Children and adults knocked hither and thither as the brave professor, net clutched in white knuckles, pounced fearlessly. A glimpse of the beast only; a snout here, a smart set of braces and dicky-bow there. A hideously gnarled claw lashed out and he was gone, bundled away by Prof. Morris for examination and reports.

I hear that he returned, chained and chastened, to the Green later but I was too afeard to return and come face to face with my nemesis. We can only hope it is finally in a place where it can no longer do any harm to itself or the innocent burghers of Camberwell. We will all sleep a little easier in our beds for this escapade.