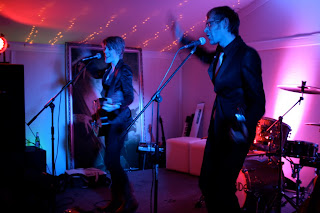 I've had a really fun week as Charlie and I embarked on a mini-tour of London with our duo - Dare To Be Charlie - which ends tonight at The Living Room, Tower Bridge. We've really enjoyed both our dates so far which included a bar under a railway in Brixton (Brixton Bar & Grill) and a tent over Kensington with Flamingos nearby (Roof Gardens).

Tonight we take our guitars and show to the Living Room, which used to be Prohibition. Really looking forward to this one as we'll see some old friends from the 15 Minute Club and get another chance to play our songs. The set is really strong these days with a great mix of Charlie's songs, my songs and the co-written material. Talking of which we have a co-written song in the pipeline for release on iTunes later in the year. I'm also really looking forward to recording new versions of live favourites - Lightkeeper and When The Snow Fell On Denver under the D2BC banner. We'll be releasing these later in the year as singles with some new songs - all featuring Haydn Callow on drums and Alex Lofoco on bass.

So if you're at a loose end do come down and check us out at the Living Room tonight, it will be a fab night of music. If you can't make it, then do check out the link below and see some pics by the fabulous Victoria Morris from our set at the Roof Gardens:

Dare To Be Charlie Live At The Roof Gardens