A Life In Sci-Fi 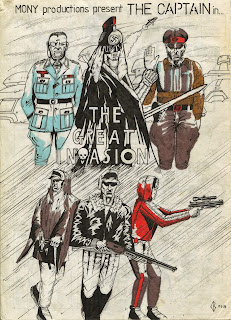 Were you influenced by Sci-fi as a child? Did you fly through the stars like Dan Dare or Kerr Avon, or prowl the dark streets of the metropolis like Captain Scarlet or Judge Dredd? I did all of this and more and from the first moment I could I recorded those adventures with pen and paper.

I was also obsessed with WWII comics (Battle & Action and Warlord) and this influenced the stories too, but Sci-fi was the real love of my childhood. Eventually I discovered 2000AD which reminded me of my dad’s Eagle comics from the 50s (which I still have) and began reading, collecting and copying the artwork from the 1980s onwards.

Star Wars (1977) changed my life. It must be hard to understand the impact that this movie had on our lives as kids. Bubble-gum cards were eagerly traded, money was saved up for toys and cardboard was feverishly crafted into spaceships, death stars and lightsabers. Star Wars harked back to the earlier matinee idols of Buck Rogers (not the camp 70s version) and Flash Gordon (ditto 80s version) and these were sporadically shown on early morning TV. The idea of battling amongst the stars had never been so appealing. Battlestar Galactica was another fascination, the silver, killer robots started appearing in my own stories immediately, albeit with a harder, grittier edge (In this case 2004s reboot of the series was actually excellent, but scarily very similar to the ideas I had been hatching in the meantime).

It wasn’t just American imports that inspired us. We had our own British heroes, the aforementioned Dan Dare, then Captain Scarlet (the man who couldn’t die – thus the perfect boyish role model as, of course, we never really died in our stories either) and, best of all Blake’s 7. In this latter case teleporter rings were cunningly fashioned from the rings of squash bottles slavered in enamel paint. Guns and control panels were constructed from Lego and friends and family duly roped in (characters carefully allotted) the adventures began (and have never stopped).

Now I continue to draw ideas and write sci-fi fiction in a literary form. Long sleepless nights are spent flying the stars and dreaming up the next chapters. The more I think about it, the more the influences are too many to mention, so below are a summary of the main ones close to my imagination with the dates they first appeared (I was born in 1968, so anything before that was TV repeats or old comics).

To celebrate this life of fierce creativity I will be exhibiting many of my early comic creations (books, comics, annuals, collector cards, fan club newsletter etc. etc.) as part of the on-going Kitchen Window Gallery series - Daren Callow v Nazi Robots. Please join me at the gallery for the opening on the 26th October 2pm – 5pm where you can handle (carefully) and read these early efforts and I will read from the very latest installment, written especially for the exhibition. Please see this link for the address and more details: http://thekitchenwindowgallery.blogspot.co.uk/

Even if you can’t join us, I’d love to hear your memories of the sci-fi heroes that influenced and excited me. Take a look at this list below and share your thoughts.