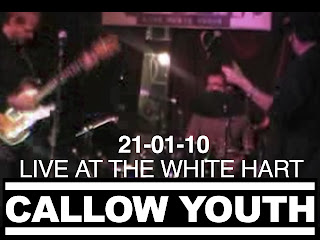 It's been a month of real highs and occasional lows. I've had some great gigs and some ordinary ones, but the good ones are outweighing the others. The band gigs have been especially enjoyable. Last week on the 23rd we played at Power's Bar again and it was a tough gig to play with the audience either a) not being into us or b) not being there. But we still played our best gig yet. Haydn was on sensational form and Wayne too (despite a trapped nerve in his shoulder). We played like there were a couple of thousand people there to see us, rather than the dozen or so that were left by the end. That is, after all, how you should play every gig, so we felt good and energised if just faintly disappointed that we didn't get a bigger crowd. It was a quiet time of year anyway, so we're expecting better things in 2010.

Which brings me on to plug our two next gigs, which are both really exciting. Firstly we'll be at THE WHITE HART, Whitechapel (Mile End Road) on the 21st January. We are the only band on, so will be using Haydn's full kit again and really looking forward to it. The gig is upstairs, and we will be on between 9.30pm and 10pm, so plenty of time to come down after work. Do come along if you can.

Then on the 16th March we have a really excellent line-up for you at the TROUBADOUR in Earl's Court. We will be headlining, and the other acts will be Charlie Savigar and the 15 year old singing sensation - Luke Jackson. We are really hoping that Frog Morris will be able to be the host and perform sketches and poetry and there will be one more opening act. This night is NOT TO BE MISSED!!!!! You've had plenty of warning, so get it in your diary now, and make sure you are there.

Meanwhile my solo gigs continue. Best way to see those is to check out my website:

I'll try and do another post early in 2010, but for now, I'd like to wish you a fantastic and music filled 2010. Make sure you get to see as many bands as possible and support unsigned and up-and-coming bands.

Andy Warhol said that in the future we will all be famous for fifteen minutes. It was way back in June of 2008 that I first played an acoustic set for the 15 Minute Club at Prohibition near Tower Bridge in London. Since that first 15 Minute Club appearance I've gone on to play at their venues in Islington, Birmingham and Oxford and the night's have always been excellent. They must have liked me too, as this year they asked me to take over the regular hosting of the Prohibition night. This was something that I was very happy to do, but it took a while to find my feet. The biggest problem was thinking what to say as I introduced the acts... I finally got the hang of it after a few weeks.

So it was with some sadness that I was there for the last 15 Minute Club of the year, and possibly the last one ever! If it does turn out to be the end of their nights there then it really is the end of an era. Mind you we went out in some style. We had nine live acts on the last night, including myself and everyone played really well. We even finished with the traditional 15 Minute Club jam (one of the things that make it very special and fun for musicians and audience alike), when both Laurence and Rae performed too. It was probably one of the most successful nights that I've been involved in there, and we can only hope that they are back next year. In the meantime though they have a new night kicking off at the Hoxton Pony on December 2nd... I won't be at that one though, 'cos it's my birthday and I'll be celebrating elsewhere!!

I certainly enjoyed my time working there, all the acts were great (thank you!) and the jams were always entertaining. It was interesting to see the difference in the way the acts treated me when I was just another performer and when I was the host! They tend to look up to the host a lot more, but it was fun to have that extra responsibility. It was a really good experience.

In other news, I've posted one more video from the gig at the Power's Bar... here it is:

I'm currently working on trying to book a few more band gigs, with some really strong line-ups, including Luke Jackson and Charlie Savigar, so stay tuned for more news on that.