Conversation With An Imp 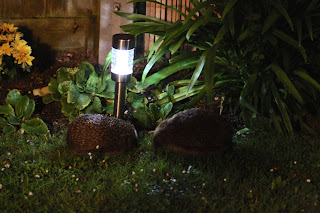 It was dusk as I wandered drowsily and stiff with the fatigues of the day out into my garden, a bag of mealworms clutched in my hand to feed my local hedgehogs. There was a simple science to doing this. Your common or garden Hedgehog’s diet overlaps with both birds and cats, so choosing something that cats are not too fond of is ideal. Mealworms fit this bill perfectly, however the local birds will happy eat those, so you have to wait to put them out until it is late enough to prevent the birds swooping and nabbing the lot. Hedgehogs are nocturnal, so you never see them in daylight unless they are unwell. Right now the warm evening light was a hazy shade of light orange, evocative and dreamlike.

With a small start I realised that standing at the bottom of my lawn in the little hollow near the bush where the fox liked to snooze was a curious looking child, or perhaps a midget as its face was noticeably older looking that its size would imply. Not dissimilar to how the infant Jesus is often portrayed with oddly mature features. It was about four feet tall and dressed plainly in white or very pale blue, its curiously androgynous features were friendly and it had a pleasant, calming smile as though it was delighted to see me. Nevertheless it chilled me rigid and a shiver pierced me through. It raised a hand slightly in a manner perhaps intended to relax me.
‘Please do not be afraid, we will not harm you.’ It spoke in a curiously adult voice, neither distinctly male nor female sounding, but sympathetic and mild. Not for the last time I was inclined to believe it. ‘Can I help you?’ I asked, trying to be calm although my throat was very dry and the words did not come without gruffness attached.
‘No,’ replied the imp with the merest of shrugs. ‘Perhaps we help you.’ It was a statement rather than a question. I swallowed and shook my head slightly to see if that helped in any way. The light continued its lazy drift through the oranges towards burnt ochre. I found myself curious that it had said “we”.
‘How many of you are there?’ I rasped dryly, flicking my eyes around nervously to see if there was more of its kind lurking nearby.
‘Difficult to say,’ it replied in a tone that seemed to imply that it would be hard to explain, rather than it being uncertain on the numbers. It was still slightly creepy though; if it had intoned, “We are legion” in the voice of the devil, I would have been no more perturbed.
‘Are you from round here?’ the question sounded daft even as I formed it.
‘Difficult to say,’ it intoned soothingly again, ‘we have been here before.’
Something felt very strange suddenly, perhaps it was the light. It was darker, but still eerily lit in ruddy tones creeping towards crimson. The clothing of the creature, for I dared not consider it human now, seemed more brilliantly white than before. This brought something to mind and without really considering it I blurted,
‘Are you an angel?’ The creature grinned broadly at this as though amused by the thought, however it shook its head subtly in a way that did not imply anything other than a simple denial.
‘No,’ it replied kindly. However it pre-empted further questions with an expanded explanation this time. ‘What we are is difficult to say. We can tell you what you are.’ The weighting on these words gave me the distinct impression that it didn’t mean me personally, but something much wider, more encompassing. I gulped but could not muster any words at this point as I was distinctly freaking right out (without any difficulty). ‘You are Selfish.’ It continued, still with a simple disarming smile and happy tone to its voice as though discussing a much-cherished pet. Fair enough, I thought but again could not muster any words at this point. The benevolent imp continued to smile pleasantly and its eyebrows lifted just a millimetre or two as if wondering if I had further questions. I did not know what to think. Somehow my lips found shapes and air left my heaving lungs.
‘Why are you here?’ I seemed to have asked, although I was not sure if I had actually spoken out loud. I was suddenly aware of my heart hammering somewhere amongst the veins in my neck.
‘To visit you,’ stated the imp, but again it seemed to imply that the visit was not to me personally. ‘To study and see if we can change.’ I gulped hard, not really following what it was saying. ‘Your planet will continue to revolve,’ it added, but my brain was now spinning sufficiently all on its own. A shudder of dizziness washed over me and wondered if I might faint. ‘We have been here before,’ it repeated, ‘we were selfish.’ This last addendum seemed to suggest that the selfish could overcome their inwardly greedy ways. Why was it speaking to me though, on this warm, sleepy evening that now ebbed inexorably into night? ‘To not be selfish, you must do something that does not benefit yourself,’ spoke the smiling face as though it had read my thoughts, could it read my thoughts? Was it even real?
‘How?’ I croaked in my pitchy head voice.
‘You feed the hedgehogs,’ it replied soothingly in a way that was neither fully instruction nor fully statement.
‘Feed the hedgehogs,’ I mouthed parrot fashion. I could not fathom the implications of the sentence. ‘Literally or metaphorically?’ I worded, astonished at my sudden evolution into some sort of philosophy professor.
‘It is difficult to say, but you should know.’ My head felt clamped now, the whole unreality of this discourse was clanging like a bell in my ears. ‘Hedgehogs are not aware that they are endangered.’ There was a rustling sound from the bushes and a snuffling that did not dissipate. I held still, I knew that hedgehogs have poor eyesight, but would depart pronto if they heard me move. ‘Life is fragile,’ said a gentle voice from somewhere.
‘Life is lumpy,’ I replied, there was the slightest of slight chuckles.
‘This will be hard for you to recall, you do not believe’.
‘You mean no one will believe me, or I will not remember?’ I do not know if I thought this or spoke it acoustically, since neither my garden nor my inner monologue has an echo.

The sky was dark now, the soft amber glow from the garden lights was the only faint illumination. I could hear the hedgehogs snuffling in the shrubbery and found some residual energy to quietly move and place their food on the ground in the usual spots. I felt like something profound had happened, but I could not tell if it had really taken place or I had imagined it. I was not sure what the difference would be. Sometimes I am awoken suddenly at night by the sound of my doorbell, but no one is at the door; it felt like that.
‘I wonder if the hedgehogs will survive our selfishness?’ It was night, and I was talking to myself.
Posted by Daren at 2:33 PM No comments: