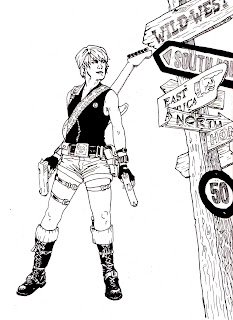 It's been another hectic and busy year so far (well that's my excuse or not Blogging and I'm stickig to it). I've already had trips to Mexico, Nashville and the top of Mount Snowdon. On the music side we played a 40 minute set at Tootsies in Nashville (more on that later). To top it all off we have created a fabulous new promo video for Charlie's new song: Following The Signs which we recorded and mixed ourselves.

This was a real labour of love and took several months to get everything together. We needed a large number of props, including a book (lovingly produced by myself with Victoria and Frog Morris), costumes for all the band and four different outfits for Charlie. After the problems with rain on the last video shoot we decided to do everything indoors. The only real option for this was to convert out house into a studio. This meant costumes in the dining room, make-up in the conservatory and film sets in the living room and front bedroom. The house was crammed with equipment and people! The illustrations in the book (see above) were created by the highly talented - Frog Morris - and he even came down to lend a hand on the day too. Alongside the band and Frog we also had a make-up artist, Maximilian White the director and Rob Macfarlane on second camera - quite a house full. To cap it all a Virgin Media engineer turned up halfway through to fix the phone - what he made of it all I don't know.

Many of the scenes were to be filmed in front of a big green screen to allow us to shoot the various locations that were in the book. This meant hanging a big green sheet up (there's a great pic of Frog ironing this flat - check out the Behind The Scenes page for this and loads more) in the spare bedroom. I soon realised though that the door was going to be in the way, so this had to come off! Somehow we also managed to get a wind blower in on the landing to create a blizzard at the end of shooting. Filming kicked off in the Living Room with Charlie and our severely jet-lagged director - Max. To give you a flavour of this, here is video clip of him explaining to Charlie what she needs to do...

I think she got it!! After the living room scenes we had to shoot all the other "locations" in the bedroom. This created a headache for Max and Rob as there was very little room and for the most part they had to shoot everyone separately and then edit them all together in post production. After lots of takes and various reactions from all the guys (and four costume changes for Charlie) - everything ended in a huge snowball fight and blizzard!! Charlie even managed to throw one snowball right at the camera lens, but fortunately she didn't break it. After the wrap it was time for Max to do his magic, we were just hoping that we'd got all the shots we needed.

Well we needn't have worried, once the video arrived we absolutely loved it! We were relieved and happy as so much time and money (about £1200 in total) had gone it to it and it came ou looking like the budget was much, much higher. So here it is, do enjoy watching (make it full screen and turn up the sound if you can, it is HD after all) and make sure you give us some feedback... oh and pass it on to anyone who might enjoy it:

Many thanks to everyone who helped getting the video together...

Following The Signs recorded and mixed by Daren Callow.
With many thanks to Ville Leppenan

Thanks also to Frog Morris, Victoria Morris, Alan and Lorraine. 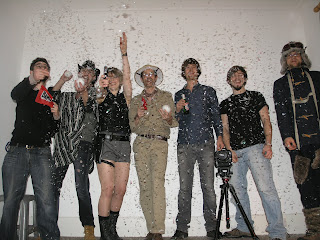