Singalong If You Know Where I'm Coming From 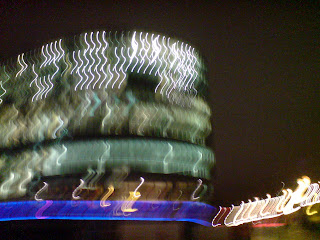 You know how sometimes things just come together? Well this week has been a bit like that. On Tuesday I was down at Bacchus in Hoxton Street to play a few tunes for the enigmatic Andreas von Graant's singer-songwriter night. Admittedly it was a very quiet night due, no doubt, to a swathe of post-bank holiday hangovers. Those who were there, however, had an excellent night. Opening up was Rachel Waite who's guitar pick-up had once been in the same room as the Beatles! I think their spirit was definitely infecting us all as she kicked things off with a wonderful set of original and cover songs. She was coaxed back for two encores (the second at then end involved borrowing my guitar, which was slung a bit low for her, but she coped admirably.

Next up was Lou who was great company all night and turned out to be a remarkably good player if somewhat nervous! Like me he can't play covers, but he demonstrated quite a range of playing in his set. He also produced a rendition of We Could Be Anything That We Wanted To Be from Bugsy Malone later on when we were well into the Guinness. He is certainly a dark horse.

Finally it was my turn and although I had brought my looper pedal I decided to leave it to one side and concentrate on unembelished songs instead. It seemed to work very well especially when the audience (such as they were) sang along to both The Fool I Am and I Need Your Love. My friend Peter summed up the gig thus (whilst very drunk on the black stuff) - She was great (pointing to Rachel), you were really good (pointing to Lou), BUT YOU ROCKED!! (pointing at me) Well I'm just glad someone approved, ha ha. Peter was last seen heading for a smoke with Lou... I hope you guys had a good evening.

I had to leave at a reasonable hour as I have to practice very hard for a gig this weekend. I am very happy to confirm that I will be playing the prestigious Duchess Showcase this Sunday 31st May. Full address below. This is a super venue and the Showcase is always a well attended night of excellent music. I'm thrilled to be playing there and am planning a great set. Please do come and join us from about 8pm if you can. For all the keen ones out there I'm also heading there tonight (Thursday 28th May) for the open mic night, from about 8.30pm.

Otherwise see you at another gig soon, next Thursday's gig at the Nine Bar is another excellent choice. Come along and sing along!! 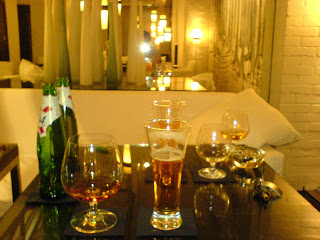 Morrissey has just turned 50 so it seems appropriate to say a few words, and what better person to kick off an occasional series on musical influences. I should say straight away that I wasn't a big fan of The Smiths, although I do own Big Mouth Strikes Again on 12" I prefer the live Morrissey version... "as her iPod started to melt". Somehow The Smiths were just too depressing in a pretty poor time for rock music in the UK.

Morrissey's solo music started in the same vein and then became more playful (if still willfully at odds with everything). I think the key difference though is the rest of his band, Boz Boorer and, particularly, Alain Whyte are big heros of mine and do, in fact, write most of the tunes on Morrissey's records. Ringleader of the Tormentors and You Are The Quarry are my favourite albums, but his band is also great live so check out the excellent Live At Earl's Court which sees them all at their peak (before Alain Whyte left the band) and includes some rare Morrissey tracks and some of the best Smiths songs too. This last record also includes one track that was never on an album but sums up the best of Morrissey's music for me, if you want one track to check out then listen to Don't Make Fun Of Daddy's Voice - cracking tune, amusing yet caustic lyrics... perfect rock.

Of course I realise that Morrissey is much like that other British tradition that begins with M - Marmite. People tend to either love him or hate him - which is the sign of a truly radical artist, I could never court controversy the way he does, but I do try to be more creative than average in my lyrics. Whichever, it's good to see some real longevity in the UK music scene, so happy birthday you old bugger - I hope you have plenty more!

Some miscellaneous memories relating to Morrissey and (ahem) booze:

1) Drinking my friend Adrian's ENTIRE collection of red wine, whilst alternately playing and arguing for early or late period Morrissey songs as being the best. We agreed, drunkenly, to disagree.

2) Missing Morrissey's appearance at a Paris festival because Peachy and I didn't make it out of the hotel bar. What can I say, I enjoy getting drunk with friends... we did make it to see Radiohead the next day, and they were utterly fantastic.

To hear the Morrissey influence, check out my song: The Fool I Am


In other news, the recording for the charity record is full steam ahead. I'm very pleased that the peerless Haydn Callow and frighteningly brilliant Paul Tkachenko have agreed to play respectively drums and bass for me. I'm very, very excited about this. Now perhaps if I can just get Tony Visconti to produce it... hmmm. Much more news on this to follow.

The recording is leading to a slight lull in gigs, but I will be back stronger than ever with some new arrangements (although no new songs just yet) on the 4th June at the Nine Bar near Tower Bridge.

Best wishes to you all,

P.S. Shamefully I have never seen Morrissey live, so the picture above is me and Peachy missing Morrissey in Paris, August 2006.
Posted by Daren at 11:06 AM 3 comments: 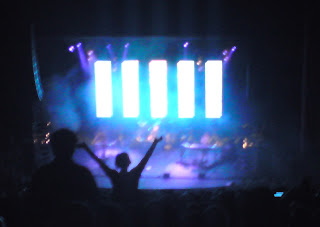 As hinted at on Facebook (be-friend me here or become a fan of my music here) I was losing the will a bit. I'd had two good, but emotionally draining, gigs in London and had got home a 1am for the third night in a row. Then just as I was questioning myself some good things came along and it's time to share these with you.

Firstly I've got two good gigs coming up and I wanted to give you plenty of advance warning, if you can get into London on one of these dates, then please come and watch and listen. Firstly on the 4th June I'm playing as a headline act at the Nine Bar in SE1 (146 Tanner Street, London, SE1 2HG) close to Tower Bridge. There are four headline acts and five "surprise" slots, so it's going to be a super night of music. Get down for about 8pm.

Secondly I'm playing at the prestigious Loom Bar (5 Clipstone Street, London W1W 6BB) as a special guest on the 1st July (plenty of warning on this one!!). Doors open at 7pm and the show kicks off at 7.45. I'll be using all the gadgets (Voicelive box and looper) for this great show and there will be some surprises even if you've seen me recently. If you make it to one gig of mine over the Summer, then make it this one.

Thirdly there is a possibility that a new recording of mine will be on a charity compilation record (in aid of Cystic Fibrosis). Nothing definite yet, but I'll bring you more news as soon as I have it.

I'm also playing really good gigs at Prohibition and The Phoenix in central London, here are all the up-and-coming dates, put them in your diary now.

See you at a gig very soon.

P.S. The picture is from Ultravox live at Hammersmith back in April - I was literally in row Z, but I still enjoyed it very much.
Posted by Daren at 2:22 PM 1 comment:

It's been another busy week, but very enjoyable and it has brought some great experiences. Last week on Monday I travelled up to Birmingham to play the 15 Minute Club @ The Living Room. It was one of those evenings where everybody was on top form, all the acts played well and the sound and atmosphere was great. I used the loop pedal for my set and was very pleased with the reaction. It was also great to see Johnny Ryder again, that lad has talent.

On Tuesday I was in Portsmouth, playing the Shrek Rap (by Casdok) again for the Portsmouth Autism Support Network. It was a very enjoyable evening and it was great the DJ Kirkby and Chris King were there to talk about DJ's book. It was interesting to increase my knowledge of the real world aspects of living with Autism and there is talk of another performance of the 'Rap soon.

Thursday I was playing at the Edinburgh Cellars and again it was an excellent night. I met the splendid Peter Paul Parker, and also a lady who sang about her sex doll (amongst other things).

Sunday night and I was back at Prohibition near Tower Bridge and actually witnessed the bridge opening to let a tall masted boat pass by on my way there. The show was, again, of a really high standard and Rae really gets the evening going with her compering. The highlight for me was jamming at the end with all the acts, but especially Tres Womack, who was over from Texas, USA to promote an Americana CD that he's on. He very kindly swapped his CD for mine and I have been enjoying playing it ever since. The track "Gather Round" which he wrote with his brother (I believe) is my favourite cut.

I have a small treat for you which I shot on my mobile phone on the way back home from Prohibition, but before that just time to plug my next gig:

Hope to see you there, for a full electro-acoustic set, loops, voices and new versions of songs for your delight.

Meantime, enjoy this rough and ready video shot on my phone on Sunday night.

I'm off on a little mini-adventure starting tonight, when I venture to The Phoenix in the heart of London. This will be a full showcase gig with all the bells and whistles (well vocal effects and loops anyway) - my friend Acoustic Ashley is playing too.

Then tomorrow night I'm heading to the midlands to play a gig at the brand new 15 Minute Club venue in Birmingham. Do I have any fans in Birmingham? We'll find out tomorrow.

Then on Tuesday there will be a return for the Shrek Rap (by Casdok) at a private autism support network event in Portsmouth. It's been fun to get practicing that again, and it's super that it's getting another hearing.

Will let you know how it goes on Wednesday when I've recovered!!

See you at at gig soon,