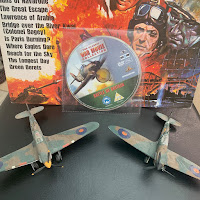 Theme tune: Battle of Britain Theme by Ron Goodwin a wonderful soaring number (as you'd expect) however the scoring of the film was not without controversy.

Format: DVD bought off eBay for £1.71 without a case

Synopsis: Well it's the Battle of Britain isn't it.  So basically plucky Brits (erm with the help of Australian, West Indian, Belgium, Canadian, Czech, French, Irish, New Zealand, Rhodesian, Polish, South African, US and other commonwealth pilots, amongst others.  To be fair the film makes a big point of listing all the non-Brit pilots at the end of the film, which is a poignant moment) take on the Germans and (SPOILER ALERT) just about manage to cling on, thus avoiding the invasion of the British mainland in 1940  The film focusses on the people but also gives very strong cameos to the equipment (Hurricanes, Spitfires and radar).

Historical Accuracy: Well as far as the accuracy of the planes, dogfights etc not bad at all, as you'd expect.  Much effort was made to locate period compatible fighters and bombers and the aerial photography is simply stunning.  The city bombing sequences are less realistic, but presumably a lot more difficult in 1969.  Notable accuracies are the French speaking French and the long waits, with mounting tension, between sorties.  The film used a mixture of real pilots, established and up and coming actors (witness a very young Ian McShane who still manages to look older than anyone else) which seems to work pretty well if it's a little wooden at time.  The panic of trying to get planes airborne as bombs are literally falling in the background is palpable and done well.  They didn't flinch from showing the dead and the effect of this on others either.

The treatment of women is mixed.  They are shown doing incredibly important jobs, but somehow also managed to throw in a few cliches and a scene of Susannah York in her stockings.

Is it a good film?: Flippin' heck it certainly is.  The flying scenes get a bit repetitive after a while to the modern eye, but that was the nature of it and can't really be criticised.   The aerial photography combined with the mundanity of ground life and the permanent scarring of those that managed to survive being shot or bombed gives it a good balance.  Perhaps compared with the modern benchmark of Saving Private Ryan et al, we are spared the very worst of what war is like, but nonetheless I think they did an amazing job at the time.  Okay it's also a propaganda piece, but considering that the Vietnam war was in full flight at the time it doesn't shy away from the war is hell theme.  The final flight of the "few" to stirring music is the complete antithesis of the music over black screen of Lawrence of Arabia, but it sends shivers down the spine nonetheless.  Of all the films I've watched in this series so far, this is the one that I would happily put on again now.