From The Heep To The Duchess 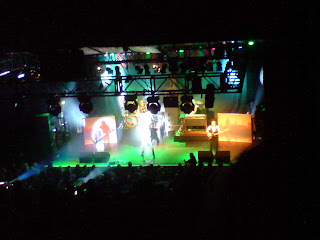 Another fun and busy music week. On Sunday I was privileged to be a guest of the legendary band that is Uriah Heep at The Astoria. As much as I enjoyed their set, I did find myself reflecting back on the other bands that I've seen and heard at this iconic venue. Is this the last band I will see there? I hope not, but things do close and the world moves on.

The Astoria is a real "old school" rock venue, that actually used to be a dance hall way back in the day. My good friend and boss - Mike - told me that his parents actually met there many years back at a dance! How many people have met at one gig or another, I wonder. Highlights of my days at the Astoria include: seeing Gene's last ever gig (where Martin Rossiter scratched away the Gene logo on the kick drum so it read "Gone" - poignant); meeting one of my heroes - Steve Lukather of Toto - in the upstairs bar (thanks Andie!!) and the climactic ending to the Longview song Further - with all the band (and most of the audience joining in) - good times.

The Heep themselves were obviously used to playing on much bigger stages, the actions were all big and the songs dramatic. Great harmonies and no compromises on being a big rock band. I couldn't help feeling though that if this wasn't the main influence for Spinal Tap, I don't know who was!

Yesterday (Thursday) saw the return of the open mic night at The Duchess. It was great to see Will again after the birth of his bubbling baby boy - Sonny. He'd moved the stage to a great new position near the door and it was great to be able to play five songs in total. A rare outing for Lullabies From The Wheels Of The Bus was dedicated to Sonny and also my friend Sarah and her baby - Harry. Much love to you all. It was fun (if a little nerve-wracking) to play in front of an audience again, but I really enjoyed it and it all seemed to go down well. The other acts were all enjoyable too, and I must give a big mention to EdMan - who has really moved his playing on since I last saw him: his album will be out very soon.

Thanks for the Bourbon Edman!!

As you might expect, if you know me at all, the birthday celebrations began in earnest last night and will continue tomorrow (Saturday) - at the Royal Oak in Borough. Come along if you can!

Right, this week's task is to write a new song - stay tuned!! Oh and if you haven't checked out all my live videos, please do - and leave me a comment!

Have a great weekend,

Is that the Peach baby? Please give her my love x

I'd would have loved to have come along, but I have my mum arriving today.

But hopefully I'll see you at DJ's book launch!

Happy birthday to you! Did you take that photo of the stage? It is very pretty. I am going to check out your live videos now. xo

DJ: Yeah the picture is of Uriah Heep at the Astoria, great colours I think. Looks even better than Sigur's muted light show.