From A All The Way Back To A 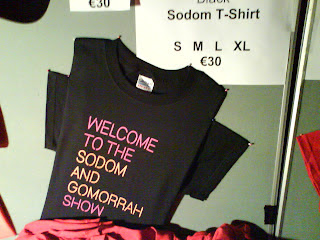 Many years ago (1987 ish) I was sitting in a pub in Stanmore with my friend Andy Hewitt. I mention this seemingly banal experience because without this event, and my friend talking loudly about the music industry, I would never have met Mike. Mike overheard Andy talking that day and went on to manage my band. We became good friends too. Because I met Mike that day, it was possible two years ago for Mike to think of me when he needed someone to go out on the road with the Pet Shop Boys.

And so the adventure began.

Because of that day I have travelled to something like 100 cities in 25 countries. I've written songs in the back of trucks in Denver; had close encounters with prostitutes in Montreal, a large snake in Miami, party people and pirates in Salt Lake City, drunk Germans in errrr Germany and Stella Artois in Belgium. I've seen where they make Volkswagens in Germany, where they race horses in England and watched the sun come up over an Austro-Hungarian hill fort in Serbia. I've bought coffee for the England football team doctor in Skojpe and ukuleles from the state fair in Phoenix.

I've had dinner and close encounters with popstars, made new friends and (yikes!) started Blogging. I've pushed scenery around, dressed up in white forensic suits, operated follow-spots and got to travel in a tour bus.

I've sold t-shirts to people of most nationalities (except in Macedonia where I didn't sell a single one!!) in tents, stadia, theatres, foyers, swimming pools, corridors and the plain old open air, all over Europe, Canada and the US - as far west as San Francisco, east as Bucharest, north as Bergen and south as Miami.

It's been a blast, and now it's over.

On the plane back from our last gig in Romania the monitor engineer Seamus passed me his iPod Video and urged me to watch an episode of Pets. I did and it was very good ("So you are saying that Gog is a dog, or a hog and Magog is a fog"). As the credits rolled a name flashed by my eyes. I had to do a double-check, but there it was. Clear as daylight.

Of all the things in all the places at all the times.

But then that's me all over.

That's life isnt it. Circles and spirals joining and interlinking and moving away, only to come back into your field of vision again when you least expect it.

HMC: Yes, quite true... as I think I was saying on your Blog recently. It's been quite a time for reflections. But then it is the end of the year... who knows what 2008 will bring!!

Alright alright, RUB IT IN!!!!

VVV: Well I wasn't meaning to show off... I've had my share of really rotten years... but it has been an adventure, and I expect nothing much will compare to it, so it's worth reminding myself of that so I realise what I had.

Hey Dazza, If I dont get a chance to visit you again before I leave to Oz, I'd like to wish you a Merry Christmas! Hope you have a good one!.

It sounds like you've had an unbelievable life. and i totally know what you mean about the shock of seeing Andy's name in those credits. I did a lot of theatre school when I was younger and keep seeing people I used to know popping up on TV. It never gets less surprising, no matter how many times it happens.

PS. Thanks for your kind words on my blog. Going to so many funerals and only ever one wedding has given me a pretty negative view of life. It helps to know I'm not the only one who is unlucky when it comes to keeping friends and family alive.