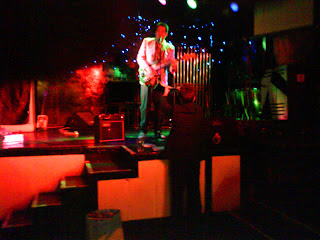 I played at the Montague Arms in New Cross on Thursday at a new event of art, music and poetry called SECOND THURSDAYS. It was hosted by Frog Morris and the atmosphere was friendly and eccentric. The bar itself has a plethora of eclectic knick-knacks, mostly of a boating nature. Any place that has a Penny Farthing as a railing and a huge model boat over the bar gets my vote any day.

I did a small set first a the main act had pulled out, playing songs from my Lullabies album.

Next up was Frog Morris doing his excellent stand-up routine, I greatly enjoyed his new take on the Spanish Armada and the poems/songs The Angry Badger and I Was The Pig Semen Delivery Man were familiar favourites.
http://www.frogmorris.net

After Frog we had a debut performance from Fred - Sweden's guitar playing answer to David Beckham. He'd never performed on his own before, and it showed, but he won the audience over with his perseverance and pluck.
http://ateljen.50megs.com/

Then it was the turn of Victor Mount, with his guitars, kick drum and violin!! He kept forgetting the words to the songs and then interrupting his own performance to tell anecdotes. Very funny.

Finally I took the stage again to play a selection of my other songs and the evening was over. It all went very smoothly and the venue is a really fun place to play. Looking forward to the next on on December 13th.