That Was The Week That Was 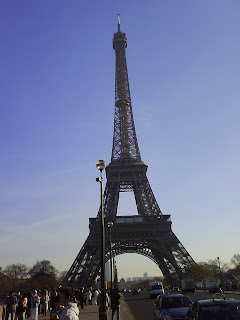 In no particular order:

1) I was coming off the tube at Aldgate East with Alex when I spotted a familiar face framed by white hair. He was carrying a camera and peering down the Tube tunnel, researching a new book or programme? It was the unmistakable features of Dan Cruickshank, I was almost tempted to ask for an autograph, but decided that TV Presenter-worrying is not really my style. He has the most fantastic voice.

2) I was in the ex-Virgin Megastore in Oxford Street (it's now called something utterly unmemorable) pottering about. I spotted that there was a band setting up in the music store in the basement. I was just pondering sauntering down to check them out when, amidst muted screams they began to play. It was Wet Wet Wet!

I ran out of the store.

3) I went to Paris with Peachy. Despite cold, strikes, a broken train and a very heavy bag (get a wheely case!!!) I had a relaxing and enjoyable time. The champagne was chilled, the hotel trendy, the food wonderful and the company perfect. Paris genuinely feels like a home away from home now, just a small shame that my friend P couldn't join us, despite living in Paris, she was in England for the weekend.

4) Went along to the 10th Anniversary of the Blue Acoustic Cafe at The Horn last Wednesday. Strange evening of crazy cheering audience in the first half and crazy cheering table football players in the second half. Had to sneak out early as I didn't feel too good, but great to see Kris, Sean, Bill and plenty of familiar faces in the crowd.

That's the week that was. This weekend features a trip to Bucharest with the Pet Shop Boys. This is definitely, finally, for sure the last gig with them ever. Well alright the last gig this year anyway. I won't be spending my birthday in Moscow after all, so next week there will probably be a big PSB retrospective.

Please check out my tunes (see below) and let me know what you think.

P.S. Check this out, very silly: http://store.shirtsofhawaii.com/tstefiuk.html
Posted by Daren at 1:55 PM

bleedin jealous of your lifestyle! lol