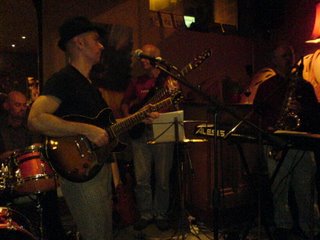 Another day, another fun gig. Many thanks first of all to Steve Antoni for inviting me to open for his band at the Biddle Bros bar in Hackney. It was a very laid back affair, with a good crowd (and a couple of dogs, who were determined to upstage us all at any opportunity). I picked a slightly stronger set than for the Pasty Co, and I warmed into it pretty quickly. It was good to get a great response even if there were a few people chatting away. It's hard when you only have a voice and guitar to overcome people chatting... my solution was to play quieter and make it more obvious that they were distracting people... they didn't mean any harm and they even complimented me at the end, so I was pretty chuffed. As far as the actual performance went it was going pretty well until I did the the two tunes from Lullabies, and for some reason the lyrics started to get to me and I started to choke up!! Just about held it together, but it's hard doing these songs that have such emotions for me... still think I got away with it. Ha, ha.

Steve followed with his band the Headonists, and they were excellent. The full band sound definitely suits Steve's songs... shame about the image of the band, but if you shut your eyes, it sounded great.
Posted by Daren at 5:54 PM