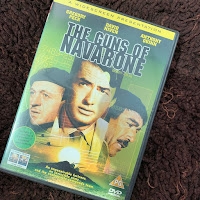 Theme tune: The Guns Of Navarone by Dimitri Tiomkin. Also features a number of traditional Greek tunes arranged my Tiomkin.

Synopsis: In order to allow the evacuation of 2000 allied troops a mis-matched group of commandos (played by Gregory Peck, Anthonys Quinn & Quayle and David Niven amongst others) are sent to destroy a pair of German super guns on a (fictional) Greek Island.  It's based on the book of the same name by Alistair MacLean (1957).

Historical Accuracy: Well it's a fictional story, so in a way this is not that important. However, since it's set in the 2nd World War some degree of accuracy is required.  Although they get most of the weapons right (a relief for me) they had a complete fail with the tanks and trucks (one of which is clearly marked "Dodge").  Also, a modern film would consult real soldiers for key scenes and there's none of that going on here, with artillery and tanks simply lined up along the coast at one point supposed waiting for an invasion.  Completely unforgivable, for me, is the scene when a soldier is using a metal detector to look for explosives, swinging it over metal rails without a beep!

Anthony Quinn pops up again playing another swarthy foreigner, although I note this film preceded Lawrence so perhaps this is what got him that role.  Actually it's interesting watching the films in this order that certain actors pop up more than once (Alec Guinness in Kwai and Lawrence, Anthonys Quinn & Quayle (playing another english officer, so again perhaps it swung him a role in Lawrence) in Lawrence and Navarone).  The languages spoken are all authentic though, with no subtitles, which works well for me. - 6/10

Is it a good film?: It's a pretty good watch, but it perhaps lacks the true "epic blockbuster" feel of Kwai or Lawrence.  It feels more like a solid 60s adventure picture, but perhaps that's fine.  It starts with quite a jarring sequence of real newsreel footage and a voiceover, which is very much not something you'd see in a true classic.  Some say it's the best of the Alistair MacLean adaptions, but I'll reserve judgement until I've watched Where Eagles Dare again.

The action sequences are key to this kind of film and they are a mixed bag.  The scenes in the boat are pretty good (and interestingly played out with just sound FX - no music, which is something modern films could learn from), but the final battle scenes are a bit TV movie compared with the current hyper-realism.  They just about get away with it, and for the 60s it was probably state-of-the-art.  Nice to see the women in the film portrayed in fighting roles and also being more flawed than is usually allowed.

PS The Extras on the DVD made for interesting watching, partly as it made it clear the actors chose the director, not other way around, and also for the way the whole island of Crete turned out to watch the filming.