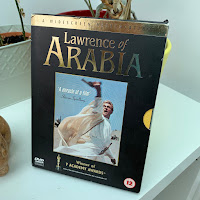 Theme tune: Theme from Lawrence of Arabia by Maurice Jarre (who also wrote the score for Dr. Zhivago) - the soundtrack won an Oscar.  One of the most interesting features of the film is that there are no images over the opening music of both halves of the film, just a black screen for 5 minutes.  This must have been particularly evocative in the movie theatre.

Synopsis: An Englishman with vivid blue eyes  (Peter O'Toole) goes out into the desert more or less against his will and ends up leading the Arab revolt against the Turks (and others).

Historical Accuracy: It's a bit of a mixed bag, the first half being more accurate, it seems, than the second.  Various scenes and characters have been conflated, and some of it was just made up.  Overall the Arabs don't seem to come out of it too well.  It also gives the impression that TE Lawrence led the Arab Revolt practically singlehanded, but this was not the case.  The overwhelming impression is that the Bedouin tribes made up the bulk of his army, but in fact it was regular soldier.  Again it's about a 5/10.

Is it a good film?: Well yes certainly it is, especially the first half where the desert is the real star (I'd be surprised if it wasn't a big influence on Star Wars) although it must have been hell to film there.  Quite how they got the camels to do all the things they did, is a feat in itself.  Again they shoe-horned in various americans to ensure it got good coverage in the States, and surely they could have found someone more suitable than Alec Guinness to play Prince Faisal?  Despite all the noted actors, it's actually Omar Sharif who steals pretty much every scene, and as an Egyptian is the most authentic character of the lot.  The only women in the film are dead ones.  It definitely loses it's way in the second half (there is a proper interval, thank goodness) with some bizarre homoerotic / messianic type scenes when Lawrence is captured by the Turks.  It's not a very strong ending to an epic film in my opinion.