The Very Best Of The Light Programme 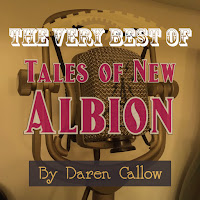 The Albion Radiophonic Corporation is, reasonably, proud to present the Best of The Light Programme 1898. When we say "Best of" we mean "most tolerated" and by "most tolerated" we mean "received the least complaints".   If you've not listened yet to any episodes of the ARC Light Programme then this is a great place to start, or at the very least it's "a" place to start.  You could, naturally enough, start with the first episode and work your way up, but hey, we're not ones for expecting anyone to act in a conventional way.  Heaven forbid.

Now this particular compilation from the first season contains a letter from Mrs. Twomble, folk songs collated by Dame Dilemna-Spaniels, Lady Boudicca & Lord Hercules of Cheam doing something or other and Mayor Flange of Treacle Dripping.  Quite how we managed to attract such and eclectic bunch of contributors is anyone's guess.

All the music has been specially composed by Charlotte Savigar and the New Albion Synthetic Orchestra.  Apparently the style is what one might refer to as "steampunk" whatever that is.

To contact the team who put the show together send a SAE to letters@talesofnewalbion.com

Otherwise click here for The Very Best Of Tales Of New Albion
Posted by Daren at 12:59 PM