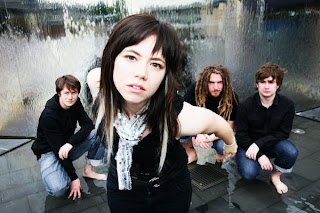 I have to say I really love The New Root. I first saw their lead singer - Trish Boothby - perform at the 15 Minute Club in Hoxton. She had a very different style singing haunting songs in a vaguely Chrissie Hynde style whilst picking on a Fender Telecaster. It's great to see a female singer-songwriter on these nights which are often male dominated, but even better to see them playing electric guitar. It turned out that Trish quite enjoyed my songs too, so we stayed in touch and I finally got to she her full band - The New Root - when Dare To Be Charlie supported them at a gig in Bristol. I have to confess I was blown away! As well as Trish the band consists of a very tight rhythm section - a dreadlocked Joel Mines on drums and an occasionally be-hatted Craig Livings on bass - and the real icing on the cake for me (who loves the use of effects on guitars) - David Boothby on guitar. After seeing them live I coined the phrase - Kate Bush meets Radiohead - and that just about sums them up in a nutshell. As an added bonus there is a real depth to the lyrics and a great energy on stage that means they have the complete package. To cap it all their self-recorded album is excellent and well worth whatever you pay for it.

I really enjoyed their recent gig at the Bull & Gate, which was just an outstanding night. It went straight into my top 10 gigs of all time! Every song was strong, with my only slight criticism being that they played my favourite number - American Tale - quite early in the set. I also particularly enjoyed their new song but I don't know the name of that one yet. I became so absorbed in watching them that I didn't even notice the venue filling up behind me.

Everyone I play their songs too seems to like them as well, so I do hope you check them out and give this band from Bristol the leg up they strongly deserve.

The New Root on MySpace

The New Root on iTunes