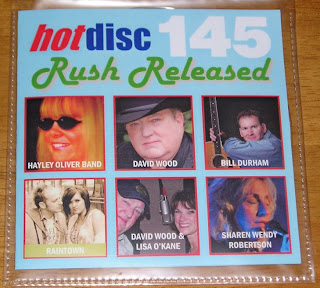 Sunday is the day that the Hotdisc charts are announced, and I can't help myself but get nervous. Some explanation is probably required: Hotdisc is a compilation CD of Country music tracks which is sent out to DJs, Magazines and other Country music people across the world. At the end of last year Charlie submitted her Country-tinged track - Long Way Home (recorded at Francis Rossi's home studio by Gregg Jackman and featuring myself on backing vocals and my brother Haydn on drums) - and this was included on disc 145 in January. As part of the package you get rated by everyone who receives the disc and this rating is used to compile the Hotdisc International and UK charts. Take a look here:

As I write this Blog Charlie is currently at number 20 in the International chart (down one) and unmoved at number 5 in the UK chart. But of course after midday today the position will have changed and eventually this song will drop out altogether. Hence my anxious wait to see where today's position will be. The first few weeks were very exciting. The song entered at number 38, then rose 9 places to 29 (the biggest mover that week), then four places up to 25, then another jump of 6 up to 19 and finally last week a drop of one place to the current position. The chart is revealed over the course of an hour long show that starts at midday and the tension builds as you get further into the show and your song has not been mentioned yet. Once we get the International position I also start frantically doing the maths to figure out where we are in the UK chart (this is published later in the day, and there is a show featuring these songs on Monday at 8PM on UKCountryRadio.com. This week will be especially nerve-wracking as we're expecting another a drop and we'll be hoping it won't be too great a fall.

Want to share the nerves with me? Well tune in from midday on a Sunday for the show hosted by the excellent Stuart Cameron:

I do, of course, remember listening religiously to the chart show when I was a kid - tape recorder poised. The chart show was the one time when you could predict when certain songs would be on the radio and the trick was to press record just after the DJ's introduction and then pause it just before he started talking over the end! A real skill. This way you could record all your favourite tracks for enjoyment later. It's definitely a strange feeling to be listening to a chart show with a real interest in one of the songs! Let's hope for another good result this week.

One other part of the Hotdisc package is that you get 100 pieces of feedback from around the world. This is very interesting to see what people are saying about Charlie's track and where in the work her music is most liked. It seems we're very popular in Australia and New Zealand (what good taste you have) so who fancies organising us a tour down under? Good average scores from France, UK and Belgium are really encouraging whilst high individual scores from USA, Cyprus, Ireland, Italy and (most intriguingly) the Faroe Islands are just plain exiting.

Here's a collection of the very best feedback we received:

"Liked Charlie but I would like to hear another song by her and I guess that will happen in the future – very promising effort."
Al Watts, Collingwood Radio, Australia

"Thanks to Hotdisc another new talent gets promoted. I liked it. Intrigued to hear what comes next from Charlie."
Tom Lambert, Variety Radio, Ireland

"No doubt at all that Charlie is very talented and must be applauded for doing her own music. Some of the comments agree that possibly a more country sound would attract airplay and it will be interesting to see if she takes her music more into that direction. There is no doubt that there is a market there waiting for her to tap into, if that is what she wants to do. Her next move will be watched by many."
Stuart Cameron, CMR Nashville Radio, UK

"Well done Charlie – this is good and you are talented."
Ricky Lee, WCR FM, UK

"Certainly uplifting singing from Charlie, just proves how the home grown country music scene is growing and getting stronger all the time, with an abundance of hot new country artists such as Charlie. A new singer to keep our eyes and ears open to, with her own self penned hit material as well."
Tom Robinson, Kingston Radio, UK

Can I just say many thanks to everyone who said nice things, it's so encouraging for a new artist!

So has that got you as excited as me? I hope so, I'll drop a comment on this Blog later to let you know where we are. Plus, you can come and see Charlie and myself play this Friday 18th February at the Water Rats in London, UK.

Have a fun Sunday.