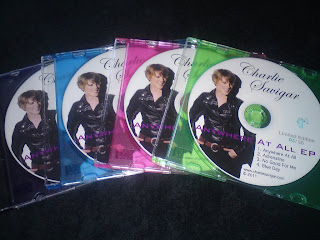 It's taken 4 months, but it's finally here! The next EP release from my musical partner in crime - Charlie Savigar. Unlike the last EP - Long Way Home, which was recorded at Francis Rossi's home studio and produced by Gregg Jackman where I sang a few backing vocals - I had a slightly bigger role in bringing this one to fruition. I had a hand in the engineering, production and mixing, as well as playing guitar and singing on all the tracks!

Aside from this the majority of the singing and playing is done by Charlie herself. She sung all the vocals and played guitar and all keyboards on all the tracks (she's a very skilful piano player, which we don't get to show off live yet). The final two musicians on the tracks are my brother - Haydn Callow - who played all the drums and Italian bass player - Alex Lofoco - who supplied all the low end notes. As is the modern way the songs were recorded in a number of locations including Acton and Clapham and then mixed in my own home studio. Charlie is one of those artists who can't really be pigeon-holed into one genre and she writes in a number of musical styles. So here's a quick breakdown of what to look out for on each track:

1) ANYWHERE AT ALL
This is a toe-tapping Country rock number. As with most of these songs - Charlie's guitar is on the right and my guitar on the left (the same as we stand on stage). This was actually the last of the songs that we recorded and I felt we got the best snare sound on this track. I had a very small contribution to the writing of this song as I came up with the "anywhere at all" lyric when we were jamming it originally.

2) ADRENALINE
This song is a full out rocker and the heaviest song we play in the set. In this case my guitar is double-tracked and Charlie's picked guitar part moves from the left to the right. We shortened the intro to make the song more immediate and we play it a little different in the live show. We had great fun getting the "heys" in the middle 8 echoing from left to right in the stereo mix. This was also Haydn's first recording playing double kick drum pedal (ie he plays kick drum with both feet, for that rolling drum sound).

3) NO GOOD FOR ME
This is a song that people often pick out as their favourite song in the live set. It makes use of a lot of harmonics on the guitar (where you touch the string lightly and pluck it so it rings like a bell or a chime). It's also a great lyric, which you might not guess is about alcohol and not being able to find the drink you like! We had fun at the end of the song as mostly it's played to a click track, but the drums and bass slow down and we had to slow our guitar parts and vocals to match what they've done.

4) BLUE DAY
Again another different feel for this song which is part rock, part blues and part ballad. It's also in 3/4 time which is a bit unusual for a rock number. The end of this song originally had a 4/4 section, but we decided to change this fairly early on in the recording process and keep the 3/4 feel all the way through. Originally it also had my overdriven guitar part played all the way through, but we gradually cut it out from parts of the song to create a sparser arrangement. We also had lots of problems with one of the sung days (the first one after the guitar solo) which had an annoying "click" right in the middle of it! In the end Charlie had to re-sing that one word!! You might also be interested to know that the guitar solo is actually three different takes edited together - hopefully you'll never know that now. I have to say I really like the ending of this track where the piano chords, bass and guitar all resolve back to the root chord. The sliding guitar stop at the end is from my very first guide guitar part.

Well there you go, that's a brief summary of each track and now, I hope, you are wondering where you can get hold of the EP!! Well check out this link:

Where you can download the tracks in MP3 format or a number of others. Also if you are quick you can buy one of a limited edition of the EP on CD. These CDs (pictured above) are individually numbered and signed by Charlie herself! Move quick if you'd like one of these as there are only 30 or so left (from 50 to start with). If you are happy to wait Charlie's EP will shortly be on iTunes and so on, and you can also download her first 3 track EP - Long Way Home from there:

Hope you enjoy the songs!

P.S. For those of you born in the CD/MP3 age you might be interested to know what EP stands for. It's actually short for "extended play" and comes from the days when 7" vinyl singles could be made to play at 33 1/3 rpm instead of 45 rpm. Slowing down the spin allowed more music to be put on the smaller format - hence the extended play moniker.

P.P.S. You might also like to know where Charlie is in the Hotdisc chart as it's chart day again today. She was at #36 last week and #8 in the UK chart.