They're not purple and they're not getting any smaller! 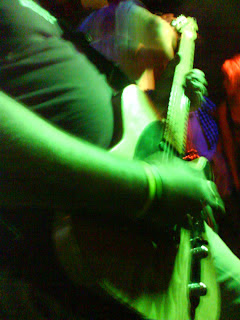 The last time I played support to Shrinking Violets was on the 24th of September, 1995! In the (now sadly demolished) Railway Hotel in Harrow. In this year of bands reforming, it seems entirely apt that they should do the same and so... I've just got back from their first gig in about 12 years. It was a great fun evening, and not least because I was playing a set myself, and also doing the sound for the bands (I'm a multi-tasker you know!).

The night was opened by Day Release, who were doing their first gig ever! They gave a pretty good account of themselves even though their guitarist had a broken foot and the bass player was wearing a kilt with ballooons stuck under it to look like a large set of balls and a little willy!

I was next up, and cracked through a few of my more up-tempo numbers. It was great to play with a clear, loud PA and on a stage where I could move around a bit. It's always very hard to compete with a large talking audience with just acoustic guitar and voice, but I played hard and enjoyed myself. I was particularly pleased with a re-working of All I Want Is You, which I opened with. I was chuffed that a lot of people made a point of grabbing me to say how they enjoyed the set afterwards. So I was happy.

After me it was time for the main event... and what a storming performance it was. These guys really know how to put on a show... as The Wizard of Oz played in the background they went through numerous costume changes, props and swapping of instruments to bring us a fantastic set. I'd forgotten how much I loved some of their songs. Thanks For Nothing is my favourite by a long way. After an Elvis impersonation, dresses, masks, women's hats, a mandolin, a mohican made of plastic flowers, giant egg-shapped papier-mache heads and a cauliflower came and went it was all over. They can all really play too and I enjoyed every second. I hear a rumour that they are planning more shows, I hope so, life would much the less rich without them. So well done 'Hippy' Paul, Mick, Kermit, 'Arms' Paul and Neil - come back soon!!!! 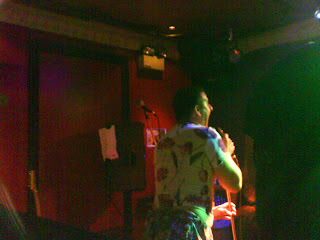 My teen has just started her college course learning to do sound recording. Any clues as to how she can get into the industry without sleeping with someone?

HMC: Well, as I mentioned in my email, experience is the thing... real hands-on experience. True for many things but in sound it's crucial. Let me know how she gets on!