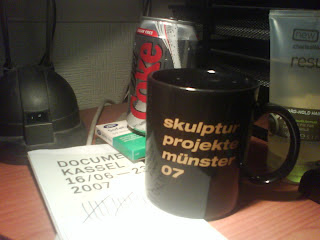 Actually I think it's a lovely mug and it's from the 4th Skulptur Projekte in Muenster and not from Documenta at all. But I did go to both last week and had a quite varied time. Documenta is an important (so they say) art exhibition and event which is held every five years in Kassel, Germany. Kassel itself is a very workman-like town in the heart of Germany with very few buildings older than the 50's. I wondered at first if it was a new town, but it turns out in fact that we bombed it flat during the war. Poignant then that the Documenta event is a very political exhibition and, this year at least, quite dark in nature. It didn't help either that the weather was lousy when we were there. After the fun of Berlin and the Kunst-Werke exhibition of Joe Coleman it came as quite a culture shock. We stayed in a business hotel just out of town and got the bus in each day to see the art. We shuffled around all the major galleries and tried to find somewhere to have fun in Kassel, but we failed. I also discovered the the brothers Grimm used to live there, grim was the word alright! So we left as early as we could and went to Muenster.

The Skulptur Projecte in Muenster only happens every ten years, and this is the fourth occurrence, so it's quite a privilege to be there. In contrast to Documenta the only politics seems to be about the interaction between art and public spaces and it's a much more light-hearted affair. I didn't get to see the Bruce Nauman inverted pyramid - Square Depression and the Guillaume Bijl buried church, but we did see some good stuff. Our favourites were the Mike Kelley petting zoo, complete with cow, goats and donkeys!! We also liked a sculpture made from crushed plastic animals, the sort that towns use to promote events. Ironically the hotel we stayed in actually had one of the painted cows in it's lobby!

Muenster is a much more fun place to go out and we managed to find a Mexican bar that served us about 6 cocktails with extra shots along the way and only charged us €28 !! We also found a fun Italian restaurant where everyone in the party gets their own charge card, no arguments about splitting the bill there then!! Now that's my kind of town!

P.S. The Shrinking Violets are reforming, and I'm supporting them at their gig on the 29th Sept at the Trinity in Harrow. Should be a riot!!

P.P.S. The Pet Shop Boys look set to announce more dates in October... hoorah!! I'm not unemployed yet!
Posted by Daren at 3:12 PM

glad you still ahve some work

Thanks guys, I am immensely happy!