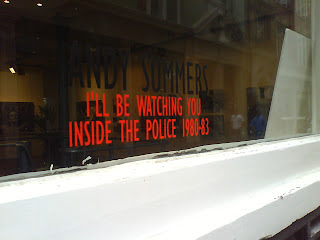 Where am I? Queensbury in Harrow in a church hall. What am I doing? I'm playing live in front of an audience on electric guitar for the first time ever. It's 1986 and the song my brother and I are playing (badly, I've no doubt) is Wrapped Around Your Finger by The Police. I'm playing a white Stratocaster copy through a Carlsbro amp... I really wanted a Telecaster. I fell in love with The Police when they released Every Little Thing She Does Is Magic, and slowly worked my way through the back catalogue. Synchronicity became my soundtrack. By 1986, mind you, The Police were nearly over. They released a remix of Don't Stand So Close to me and then split up. My first gig was a Sting gig, I wished it was The Police.

Where am I? Soho, London. What am I doing? I'm at a gallery looking at pictures taken by Andy Summers in the mid-eighties. I'm not alone, the other guy in the room is another 30-something. I feel rumbled. It's September 7th 2007. I have the Telecaster now. I can play Roxanne and Message In A Bottle. I can even play Every Breath You Take, but it's harder. I've been playing in bands for 21 years... still one thing I haven't done yet... see they guys that started it all play live.

Where am I? Twickenham Stadium. What am I doing? Well you can probably guess. It's September 8th 2007, my friends and brother are all here (somewhere) alongside 55,000 other people. On a stage, somewhere down there, a small figure walks onto a darkened stage and starts to play a gong. It's Stewart Copeland and he's closely followed onstage by Andy Summers and Sting... something I've waited 24 (ish) years for is really happening. I can't actually believe it. The crowd roar as Summers starts to play Message in a Bottle. I panic, I can't hear anything! But the crowd noise abates and I get treated to 2 hours of pop perfection. I cry. Someone buys me a drink. I start to sing along with everything. I'm pleased I know the words to some of the less well known songs. Andy Summers plays some huge guitar solos... why the fuck not. I don't care, I love it. I cry more. Somehow we get home. I don't really remember.

Where am I? The Horn in St. Albans. What am I doing? I'm on stage playing Do You Want To Dance? I improvise some lyrics from Every Little Thing She Does Is Magic. It's Sept 9th. I got to do the one thing that I really wanted to do and never thought would happen. I've been through the gamut of emotions and come out singing. I don't cry. I smile and have fun. Life carries on. 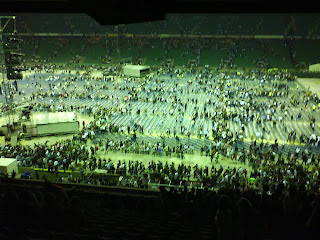 Dood it was wicked - we shoulda got drunker and raided the stage - we should been playing with them - we shoulda, coulda, woulda

The Police love YOU dazza doo, well they would if they heard you