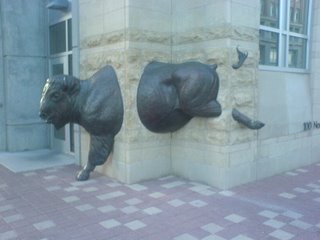 So yesterday I bought a ukulele... not in tune yet, but an interesting instrument nonetheless. I was at the Arizona State Fair in Phoenix, we got done so early that the band actually came off stage at the time they would normally go on. Somewhere in the night the other bus broke down, so I woke up to find us parked up at a garage with everyone on our bus, and that's how we continued on our way to Salt Lake City. Amazing journey running parallel to a range of mountains, scrubland and prairie all around. Made me think of when I was in Omaha and found a series of statues showing the pioneers travelling through the city, startling the bison who in turn startled the geese. The bison and geese actually go through the buildings at some point, very surreal... it's an attempt to show that not long ago all this was wilderness, until the europeans arrived and built a city. I can't imagine what must have driven them to pack up their whole lives into a wagon and head out into an area where nobody had been before.

So today is all about music rather than words... so not much to show you on a Blog!! Still, I'll try and get some music uploaded when there is something to hear. I'm in my hotel room working in Garage Band, which is a great program that I'm trying to get the hang of. I've got a few ideas flying around in my head, and I'm starting to shape them up, not easy without a guitar, but I'm determined to get somewhere.
Posted by Daren at 12:33 AM