In the Car Club 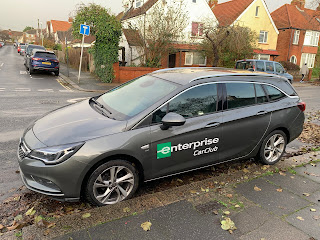 The final straw was probably when it grew mould.  On the inside.  It was time to get rid of my car again.

I’d actually had a quite longish period of no car ownership back from about 2003ish until about 2010, relying on a partner’s car or my dad’s when I really needed one.  But in 2009 I was back in a rock band again and it’s hard to cart amps and drums and so on without a car, so I had to re-enter the motoring world.  Not having a lot of spare cash, I plumped for a slightly knackered Skoda Octavia 2.0TDI that at least had pretty decent space and mpg.  This car, whilst perfectly adequate, turned out to have a battery drain issue that meant it often wouldn’t start if left for a day or two.  A temporary solution of disconnecting the battery every night wasn’t going to cut it forever, so I flogged it to some Romanians for £400 and raided my savings to get something better.

I have to admit wasn’t particularly enjoying the experience of being a car owner at this point, so I thought I should at least try and get a car that I’d enjoy driving.  One of the few cars that had fulfilled this criteria from my company hire car days was a BMW 316i, the old boxy ones, E or F reg if I remember correctly.  We weren’t actually allowed to get them as hire cars, but a friend of mine (Arif) had stumbled on a loophole.  When the cars we were allowed to get (Vauxhall Cavalier type bland nonsense) were unavailable, the hire company would upgrade us.  So my friend had ended up with a BMW this way one time.  When he phoned up to book the next one the agent asked him “What did you have last time?” and innocently he said it was the Beemer and that’s what he got again.  So began a rather fun time when I got to drive a couple of the aforementioned BMW 316s, a Golf GTI and an Escort XR3i.  The BMW wasn’t even a “sports” model, but it was, by far the nicest of the lot.  In my opinion car design pretty much peaked in this period (late 90s I guess) nothing has ever come close for me since.  I actually ended up owning a Ford Escort 1.6GL, an utterly lethal tin can of a car, capable of 0-60 in less than 10 seconds.  This was followed by a Vauxhall Calibra 2.0i 8v in pearlescent paint, that I stuck 5-point alloys on, a car I drove at over 120mph on my first test drive!  My final car in this period of ownership was actually another BMW – this time an ex-company car 316i Compact.  A solid car, but nothing to write home about.  No, it was always the memory of that first 316i that kept coming back.  At the time what I would have really liked was an M3, but that was always beyond my means.  So when I found a listing for a BMW 320i M-Sport Touring (estate to you and me) it ticked enough boxes, so I went for it.

The car itself was an 06 plate and, whilst it went round corners in a pleasing way, it had a habit of letting me down.  I went through a top hose, a valvetronic unit and a host of other bits and bobs.  The earlier cars I’d had were all, pretty much, self-maintainable.  The Escort had had the lot. With the help of my friend Mark, I’d changed the front brake disks and pads, spark plugs, starter motor and alternator. We’d put in a new set of Blaupunkt speakers, a couple of pull-out radios (they were easy to nick, just smash the rear quarter light and let yourself in) and a couple of aerials (the auto extending ones tended to snap if you leant on them, the final one was a woven steel example).  In my first car, a Ford Fiesta L (950cc engine) I’d even made a head gasket out of a cereal packet, with my dad’s help.  But these later models were harder, and more expensive, to look after.  Luckily, I had a BMW garage - with a spares department - nearby when we moved to Hove, and eBay was now a thing, so I did what I could, but still it ate money.  Then COVID struck and the thing ended up parked on the drive for months on end.  The battery went flat, but that was no biggie as I had a booster battery and smart-charger from my Skoda days. It also developed an issue where it wouldn’t open on the button in the key, so you had to use the real key and set the alarm off every time you opened it. This was starting to get annoying.  But when it grew mould on the inside (I guess it had developed condensation when the sun was on it, that then led to the right conditions for mould to grow) I knew it’s number was up, that was also when I thought it was time to look again at whether I actually needed a car at all, our band days having come to an end with the advent of our family.

In many ways I was already living the car-free life.  I’d started cycling before lockdown and had finally treated myself to a decent urban bike – a Raleigh Pioneer.  All my shopping was done on foot, trips out were by train and bus and we only really used the car for visiting family, trips to National Trust type things and holidays to the west country.  Would it make sense to ditch the car and go down the club car route?

I have to admit I was nervous to do it.  There was an Enterprise Car Club car two streets away, so it wouldn’t be much effort to get it. There was only one way to figure this out – set up a spreadsheet. Part of the process was understanding how much my (by now running pretty well) Beemer was worth.  I logged on to one of those websites that promises to buy any car and got a value of about a grand (it had been 6k when I bought it) which was probably pretty fair.  Somewhat suspiciously the very next day a guy knocked on my door asking if I was thinking of selling my car.  Well since I was, we came to an agreement and my car was gone later that day for a tenth of what I paid for it in cash.

The spreadsheet was somewhat inconclusive, so I’d first tried the local car hire company.  The car we ended up with was a dented, low spec, tin can which didn’t really inspire confidence.  So that was out.  I consulted the spreadsheet again, this time realising that, although I had good figures from the cost of owning, servicing and maintaining my previous car, I’d forgotten to factor in the price of petrol.  This is included in the hire cost of a Car Club vehicle (there is a card in the glove box for you to use) and now the numbers looked pretty good.

So, I took the plunge and joined the locally available Car Club (Enterprise) – that was 10 months ago.  In that time we’ve had a good experience.  We’ve mostly used Astra SRi Estates.  Modern cars that we, possibly, could just afford, but we’d have all the expense of looking after them.  There are also smaller hybrids, people carriers and even vans that I can borrow by the hour or day in walking or cycling distance of the house.  We’ve not yet done a holiday with one, but we’ve done all the other journeys that we’d make in a year and they’ve all been low hassle.  There were some teething troubles – getting my head around the process, understanding how to operate and start some of the cars and, worst one of the lot, people parking in the designated car club parking space (please don’t do this, a) you’ll get a ticket, b) you are literally blocking a space used by dozens of local people, do you really want a bunch of extra cars parking in your road?!).  But I’m there now.  I actually quite look forward to taking one of the cars, they are usually clean, always well maintained, and the feeling when you park it up (and take pictures all around to prove you didn’t damage it) and IT’S NO LONGER YOUR PROBLEM is just the best.

I’ve yet to crunch the numbers properly, as I’m not yet at a year of membership, but to make sure I had accurate figures to work with I calculated my annual cost of petrol in my old car.  This turned out to be more than I think the total cost of my hires this year will be!  So I’m looking at a saving of about £2,000 this year!  Quite remarkable.  With the cost of petrol rising, I knew it was probably time to move on a car which could only do about 36mpg max (I really didn’t want a worthless stranded asset), but I hadn’t expected the savings to be this big.  I can afford to take the car for a full week’s holiday (when I’ll rarely use it) and still be saving money.  Although, one of the huge benefits is that I’d can get a quote for doing this and compare it to all the public transport alternatives.  The real cost of our travel is now comparable like-for-like, we have no embedded costs (as those who lease a car do) we can judge each individual trip on its merits, and pick the cheapest (and best) option for us.

This method of shared ownership really is the present and the future.  I doubt we’ll look back, although now we have two kids we’ll have to see. Fortunately, our eldest prefers the train, bus and being on the back of my bike, way ahead of being strapped into a car.  So we’ll see.  One other unforeseen bonus is that we can now rent out our drive (we make about £80 - £90 a year so far).  With a CPZ likely to be introduce in our area soon, this should prove increasingly lucrative.

I’ll post again when I have the full year’s figures.  In the meantime, if you have any questions about any of this, please do ask.  The future is a world with much lower private car ownership.  For me it’s the dream, for everyone else it will mean quieter streets with fewer cars on them.  Win, win surely.