Call This A Cycle Lane? 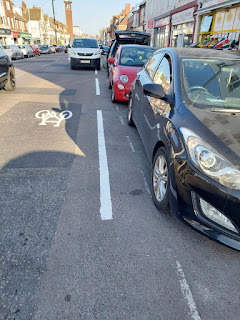 Bikesy has been at it again.  Not painting back in the wonderful and tragically removed Old Shoreham Road cycle lanes this time. The bits in the single motoring lane parts that is, that should f*cking well still be there no matter what your opinion. No, this time they have ventured to the more refined vistas of Portland Road, so cultured is it that über-cool Bess Atwell even mentioned it in a pop number (Co-op). Sadly, this road has become infamous of late due to being somewhat sub-optimal for pedestrians and cyclists. The 35 side roads are probably mostly to blame (yes, I have counted them), although motor vehicle parking (both legal and illegal) and rather a lot of speeding motorists doesn’t help.  Pesky residents on bikes keep getting knocked over (tsk tsk, they should get more hi-viz).  The situation got so bad that for a while it had not one, but two petitions begging councillors to take action.  However, the folk who council (is that a thing) around these parts aren’t too bothered to go out of their way for residents who cycle, or anyone wheeling really; like children on scooters, disabled folk on mobility vehicles, you name it, they won’t touch it with a 12-foot barge pole (metric barge poles are available). No, they are far too busy bending over backwards for the much-beleaguered motorist.  Indeed, so unenamoured of the non-fossil-fuel-powered types are they that when a local school asked for action on road pollution, rather than taking steps to slow or remove traffic from the vicinity, they did absolutely squat-a-rooney.  Or perhaps even less than that.  In the end it was left to the parents at the school to, wait for it, crowdfund a hedge to at least try and mitigate things a bit.  Your blogger was moved to email our MP, a certain Peter Kyle, to express my outrage but an assistant replied to tell me: it was a crying shame, but he’d not be doing anything either. Plus ça change Rodney?

Well now ignoring the stunting of kid’s lungs is one thing, but facing the brace of petitions to do something, nay any-damn-thing about road safety, the councillors in question finally realised that perhaps [the votes of] locals mattered more than people driving through.  At least, that’s my best guess.  So, it was deemed that action would be taken!  However, rather than one of those cheeky proven solutions, like, oh I don’t know, off the top of my head… protected cycle lanes, they went for something a little more outré.  No, in a gushing fit of, “we know how to bring both sides together” in a one-horse race, they came up with a plan that was somewhat more subtle. The, let’s kindly call it, compromise plan, involved planting some trees, putting in a few Sheffield stands and narrowing four or so of the many (35 exactly FFS!) side roads to slow ingress and egress of the almighty driving community.  This last bit was, at least, a good idea, if a little short of the gold standard.  Still all this favoured the horticulturalist (mildly), pedestrian (a little) and the stationary cyclist without a shed (a smidge) but not much for yer actual moving bicyclists.  Something else was required, so what they came up with was a series of white painted lines (to mark where the doors of cars might open by the acres of car storage) and a few bicycle stencils IN THE MIDDLE OF THE ROAD.  Well, I say in the middle, but I actually mean, offset to the left (like the steering wheel of a K-reg Vauxhall Calibra, trust me on that one).  Sort of saying, why not ride here oh bewheeled denizens of Hove?  Well, sure I can, but that’s not really going to protect me from anything very much is it?  Said cycling “measures” didn’t even run the whole length of Portland Road as they rather petered out in the vicinity of the deadliest junction of all – Olive Road (the only place to cross the railway in the whole length of Portland Road, look it up) and neighbouring trading estate. I was rather nonplussed by this solution I have to say.  And it seemed that Bikesy, or another guerrilla artist, god knows Hove has enough of them, agreed with me, as word got round (well I saw on Twitter) that someone has cunningly added some graffiti to the paintwork.

It took me a couple of goes, but I eventually located the artwork.  Painted by the bicycle symbols in the road, heading west, were the words: Call. This. A. Then they cunningly used the representation of the bicycle as a cipher for, well, a bicycle. Lane.  Call this a cycle lane?  Well, no, I don’t think I can call it that.  I call it some white paint applied in a fairly arbitrary fashion.  It won’t slow the motor traffic nor will it remove it. No, as always with advisory painted stuff, rather than sorting the issue once and for all, it’s mostly just bemused people, cyclists and motorists alike. And to think we paid for this nonsense. I suspect it will have the opposite effect of what was intended.  Which is to say that locals who cycle won’t be voting for the councillors who approved this crap.  If you want to protect cyclists build a damn (protected) cycle lane, stop illegal and dangerous parking, close the rat runs, put in a 20mph speed limit and then enforce the hell out of it.  If you want to protect kid’s lungs from pollution then remove parking near schools, close roads at school times and enforce anti-idling laws. I mean shrubbery is nice and all, but it’s not going to save anyone’s life.

Anyway, I made a TikTok about it like the cool kids and put it on Twitter, you can watch it here.