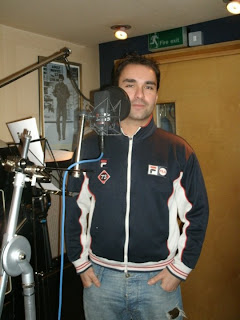 I've played a great many acoustic and open mic gigs over the last three years, and the largest number of them have been for Daniel Joe. He's been running nights at The Phoenix, Power's Bar and the Edinburgh Cellars (plus one or two short lived others) for about two years now. He's always been a patient host and sound engineer in the face of many many acts of varying quality. It's been really inspiring to see how he's championed and rebooked a number of acts who were prepared to play regularly and work hard on their sound and songs. So it's with some sadness that we have to say goodbye to him for about 6 months. As well as a promoter he's also a singer, guitarist and performer in his own right and is off to perform in Cyprus for 6 months over the Summer. I'm sure all the acts that have performed and developed their songs and performance at Dan's nights would like to thank him and say goodbye in style, and there are two really good chances to do that this week.

On Wednesday (14th April) it's the last of Dan's nights at the Powers Bar in Kilburn (details below), and then the really big one: The Phoenix on Sunday (18th April) when a really large number of Dan's acts will be doing a small turn to say farewell. Charlie Savigar and I will be performing at both, on Wednesday it will be our duo act (which is really starting to turn a few heads) and then on Sunday a unique and mouth-watering performance backed by Callow Youth (Haydn Callow & Wayne Myers) with a half hour set to round the evening off and send Dan off in style.

These are going to be really fun, and perhaps a little emotional, nights so do come along if you are free on one or both, and see some of the great acts that Dan has helped to develop and support these last two years.

Farewell from all of us Dan, have a fantastic time in Cyprus, and we'll see you for more gigs when you are back in England!