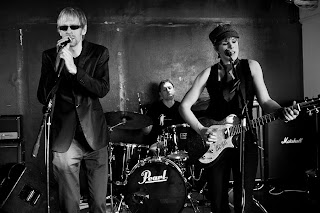 There are quite a few exciting things happening behind the scenes: a new band, some new songs, gigs further afield in the UK and Europe and even a new guitar. But these are all for the future, in the present there are two really exciting musical projects to savour. Firstly my duo with Charlie Savigar is starting to attract attention and fans, we're expecting the crowd to continue to grow. Do come and check us out as soon as you can, there are lots of chances coming up (check on MySpace for a full list). Secondly my new band (Callow Youth) continues to get rave reviews and we're getting tighter all the time as we really start to know the songs, and get into the live vibe.

Here are the next three chances to hear me play, do come along to one or more!

Photo is from Charlie Savigar at the Camden Rock taken by Annelie Rosencrantz. Check out more pictures from this gig on Charlie's redesigned website: www.charliesavigar.com
Posted by Daren at 12:04 PM