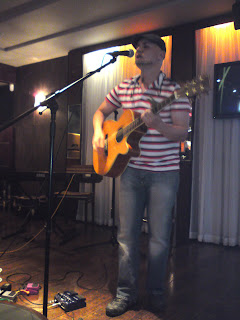 It always amuses me when bars make some reference to abstinence or temperance. For example near Clapham Common there is actually a bar in an old Temperance Hall. Another example is one of my favourite venues to play - Prohibition Bar & Grill. I've been to two excellent Sunday nights there recently both courtesy of the wonderful people involved with 15 Minute Club.

Two Sundays ago I played an excellent night there with just two other acts including the lovely Liz Fyfe band, who were all very friendly people. Last Sunday I caught my mate - Acoustic Ashley (pictured above, he doesn't have a beard, that's a harmonica) doing some excellent looping there and also the talented and beautiful Linn Öberg. Both were really good nights with a good, appreciative crowd creating a fabulous vibe. I'm heading back there to play again this Sunday, so do come down if you want to be part of a fun and exciting night.

I also have to mention 15 Minute Club's night at the Living Room in Birmingham. I've played there twice now and both times the vibe was very friendly and relaxed. Looking forward to getting back there before too long.

Talking of returns, I'm also heading back to the Nine Bar on the 6th August. Coming up sooner I'll be at the trendy Shunt bar, down in the vaults at London Bridge. It's a night hosted by Frog Morris, who is also running his much talked about night at the Montague Arms - THIS THURSDAY. So do come down to any night you can make.

One other bit of news is that I'm finishing the Faith! mix of Lightkeeper today and tomorrow - it's sounding very good with real drums and bass now in place and I can't wait for you to hear it. Talking of which, I just found this video:

They got the captions slightly wrong, it is me and the song is definitely Lightkeeper.

You play and visit such cool places!