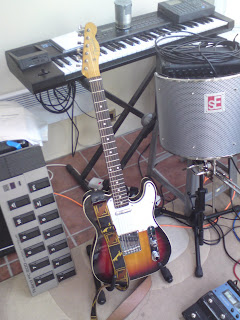 Work proceeds apace for the Faith charity album, and I am pleased to announce that the launch of the album will be on October 24th in Margate, Kent. The venue is called the West Coast and the night will feature acts like Charlie Savigar, Unfolds, Eddy Johns, Kayley Weller, Luke Jackson plus direct from USA: Billy Page. We will also have guest artists like Shaughnessy and, of course, myself playing on the night. I understand that tickets will be limited in number and will be on sale very soon. I will post more information here, but you can keep right up to date by checking out the album launch Facebook group.

Work on my new mix of Lightkeeper is progressing well, today I added and entirely new electric guitar part (Telecaster guitar pictured above). Now I just need a killer vocal and I should be there.

Don't forget that next Wednesday 1st July is my featured artist slot at the Loom Bar, 5 Clipstone Street, Great Portland Street, W1W 6BB. This will be a full electro-acoustic set with a new arrangement of After All featuring the loop pedal. It will be well worth coming down, doors open at 7pm, and there are seven hand-picked acts to watch. Get down early and enjoy the night!

Other gigs are as follows:

I'm also hoping to help out with some production and mixing for Fit & The Conniptions new album, so stay tuned for more news on that.

See you at a gig really soon!

I'm looking forward to the new album. A new friend on another site that I'm on will be looking into your music. He's in the UK so may be able to see you live!

Good luck with the launch. Come do some gigs down closer to us! xo

Nitebyrd: Yes, it should be very interesting to hear all the different acts. It's going to be a downloadable album too, so it can be enjoyed all over the world.

Hope your UK friend likes what he hears.

DJ Kirkby: Well to paraphrase Wayne's World II - if you book me I will come.