Until We Pass This Way Again

Yes, it seems I have found my folk roots, or perhaps I've just been hanging out with Eddy Jay too much. Either way, I now have a demo of Until We Pass This Way Again for your thoughts. It's certainly a bittersweet song, about passing of time, but also about the way that things move in cycles - no matter what happens the Sun will always rise in the morning and Spring will follow Winter. This is just a demo, vocals and guitar together in one take (via my TC Helicon VoiceBox, so the guitar is not as nice as it will be when mic'ed up) but I think it has enormous potential and I'm already hearing violin (perhaps just a single one) around the two-thirds mark. But anyway, without more ado here it is:

Let me know what you think! (lyrics in post below)

It's been another busy culture week. On Monday I was in a photo studio in London Fields assisting on a shoot that involved two clowns, a ballerina and a bodybuilder... oh, and some marshmallow dumbbell sculptures!!! It could only be the latest project by Alex Staiger - watch her website to see the results in a week or so.

The Friday before I had great fun at Zero De Conduite at the Elevator Gallery in Hackney Wick. The highlights were the excellent Sculpture doing live tape loop mixing accompanied by visuals that involved a record player and a video camera. Really good stuff. Here's the first three minutes on You Tube.

I also enjoyed James III And The Puritan - who is an almost indescribable mix of live mixer, DJ, grunge guitarist and, well, weirdo in a very strange outfit of cape and multiple headwear!! The Home Office were also excellent cleverly playing along to a video soundtrack so they had synched videos for their songs. Also appearing and entertaining were Craig Template and a gaggle of performance artists. 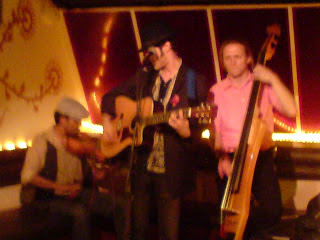 This Wednesday just gone I was partying at the Notting Hill Blag Club with Wayne Myers (whose birthday it was), and doing a little bit of promotion for my gig there next week. Talking of which, here are the next few coming up, do come along if you can.

Oh, one final thing. Why is it impossible to buy string anymore?! I mean, where do you get it from... no one has it!