Oh I Do Like To Be Beside The Seaside... I 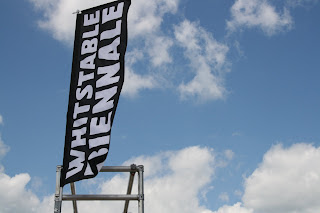 It's taken a few days to recover sufficiently to write this review of the Whitstable Biennale 2008. Not that I didn't enjoy every minute, but two weekends in a row of very little sleep have taken it out of me a bit. Undeterred though, here we go...

The Whitstable Arts Festival lasts about 3 weeks and comes around every two years. I had no idea what to expect, the last Biennale I went to was Documenta in Kassel, which is a very dreary German prison town. Whitstable on the other hand is a beautiful Kent seaside town on a picturesque pebbled bay. We even got lucky with the weather, sun and rolling clouds with no rain at all. Just as well as we were there to see the performance art, which was mostly outside.

When we arrived the first thing to do was hit the beach, where we came across the The Man From Above (otherwise known as Charlie Tweed) there to inform us of how to avoid being drowned by building a platform or occupying high ground. I was particularly taken by his survival outfit of wetsuit and welding mask that, he informed me, had been purchased from eBay! Also on the beach was a sea container featuring a video by Jananna Al-Ani. Video in a sea container is fine, but it was so bright outside that you couldn't see it unless the door was clanged shut behind you, visions of Kassel maximum security prison flashed through my mind! Leaving the beach behind us we checked out some more screenings and then had a well deserved rest.

Next appointment on the Saturday was to see Lee Campbell's performance - The Fall And Rise. This event had already enjoyed much publicity in the national press, and a call for volunteers had been very successful. The anticipation was immense as we waited on the beach with about 400 other passers-by and art lovers (we do love a good crowd in England, I'm sure half the people waiting had no idea at all what they were waiting for). We didn't have to wait too long, as Lee and several dozen volunteers marched towards the beach wearing suits and shouting slogans from the hit TV series The Fall And Rise Of Reginald Perrin. "I didn't get where I am today by eating greasy sausages" or similar... as the cameras flashed and people gaped in amusement, they all made there way down to the lapping waves and then recreated the scene where Reggie strips off and runs into the sea to fake his own death. Unfortunately I had to leave at this point to start setting up for the evening, but I talked to the curator Frog Morris later and asked how it went. He replied that there was rather more full-frontal nudity than he'd been expecting, but general consensus was that it had been a fantastic event. And the day was not over yet!!! 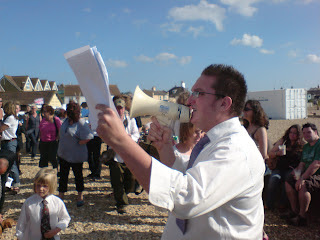 The final event of the day was the Seaside Cabaret at The Smack. The Smack is a little (and I mean little) seaside Inn with a horseshoe bar, beer garden, pub dogs and a gaggle of bemused regulars. Their day was to become slightly surreal as a succession of performers and artists trooped through the door. First up was Princess Penang, aka Alex Staiger, who dressed in gold catsuit, tiara, kid's bikini and that strap-on and using a mixture of marshmallows, a lollipop, cake sprinkles, a trampoline and heavy metal guitar riffs (courtesy of yours truly) she proceeded to wow, stun and heal the locals and other passers-by. One of my highlights of the whole weekend was when she healed Das Schimmel and Herman Rarebell III. It was a truly unmissable and unique art moment. After the pub garden healing we moved inside for more cabaret. The evening was hosted by Dawn Chalkley in full drag, and was kicked off by Frog Morris with his drawings and stand-up routine. After Frog it was Victor Mount with tin can guitar and more funny tales delivered in his usual laid back style. After him came the truly extraordinary Leigh Clarke, who does a quite jaw-dropping human beatbox performance. After this mesmerizing set the final act was Deference Engine, a prog-rock band from Norfolk. They wow'd the crowd again with a set of intriguing songs, finishing off with the crowd calling for Big, Big Sofa and a rousing chorus of Angry Badger!

After that it was back to the artist's house to sleep it off, and that was just the Saturday! More to come on the Sunday's hi-jinks later.
Posted by Daren at 12:11 PM

It sounds like a fabulous weekend. Ive never been to Whitstable but I believe it's famous for its seafood.

Phew! All that in one day! Sounds FAB!

I got a very exciting parcel today!!!

You know I was just joking right? :-)

We have crunchie bars here, but I have never even HEARD of the other one before! SO you did very well!

I've got them in the freezer to harden them up!

Cake: Yeah the food was good too... that's in today's part!

Trixie: Yeah it was too good, and there's more to come!

Giggle!: Hey, you are welcome... I tried to pick bars that would survive the post... I had a sneaking suspicion that Yorkie was unique to the UK. I hope they still taste okay!!

The chockies were DELISH Thank you!!!

I've still got half the yorkie bar because is was so deliously rich to eat in one go (no wonder it's not for girls - I didn't have the balls to finish it off!) :-P

BTW The lovely Nitebird has done a plug on you!

Hi. I read your story in 'You're not the only one'. It was beautifully written and very emotive.

Giggle!: Yeah, that's a man's bar o'choccie alright! Ha ha. Glad it survived to be enjoyed, and thanks again!! Thanks for the prompt too... I'll head off to check out Nitebyrd now!

DJ Kirby: Thank you! I'm only up to page 53 so I haven't got to your piece yet. I've read some really good stuff so far though, it's an excellent book all round. I hope you enjoy the Blog, as it's a bit different from what's in the book.