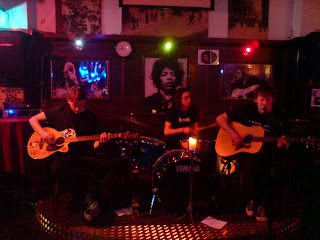 Last Thursday I tramped up to Mannings Bar in Hendon with my guitar to play a set. I had been looking forward to this gig for a while as it was the first time in a bit that I'd had the chance to play a full set. The venue itself is a small stage and PA in the bar and myself and the other act were well looked after by George who hosted the night and did the sound. Initially it was myself and two bands but one act had pulled out so my set got even longer. They had been hoping to stream the concert via the internet, and I excitedly texted a few people I knew to check out www.theshowliveonline.com but in the end they couldn't get the streaming working so nothing got broadcast. Shame, but they should have it working for next time so that will be exciting for my far-flung listeners, plus I have a copy of the video on the way to share with you. My set went pretty well from what I could judge and I felt confident to include Vulnerable, which I only tend to play in more intimate venues. The new song The Fool I Am got a second airing too, check out the post below to hear a rough version of this tune.

My full set was:

All I Want
Do Your Want To Dance?
Obsession
Lightkeeper
When The Snow Fell In Denver
The Fool I Am
Vulnerable
I Need Your Love

The act after me were Skeleton Gun who had schlepped all the way down from Manchester for the gig. Despite the lead singer having a cold (and them having to beg, borrow or steal a few instruments, including my guitar) they played a great set. The singer was so on form that at one point in their set I found myself standing next to the bass player and drummer at the bar! They were good lads and even put up with me telling my Ian Brown story again (well the lead singer was wearing a t-shirt saying "I Happy Slapped Ian Brown" so what can you expect?!).

Looking forward to the next gig now, and the video from this one, so I can enter the YouTube world once again.

YOU SO TOTALLY ROCK!!!

I would LOVE to see a live gig!!

Giggle!: THANK YOU!! Yeah, you have to see it live to get the whole package...