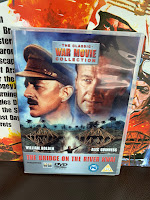 Theme tune: Colonel Bogey (K.J. Alford) and the River Kwai March (Arnold) - the former was a marching tune known to soldiers in WWII.  It is particularly haunting when first heard as the POWs march proudly into the Japanese camp.

Format: DVD bought off eBay for £1

Synopsis: A group of WWII prisoners of war are forced to built a railway bridge over the River Kwai by the Japanese.  The Colonel in charge of the british prisoners (Alec Guiness) stubbornly refuses to allow officers to work alongside the enlisted men when demanded to by Colonel Saito (Sessue Hayakawa).  When the bridge falls behind schedule he takes it on as a matter of pride to build the bridge properly.  In the end a commando raid destroys the bridge and at that point the colonel questions what he's done.

Historical Accuracy: Probably about a 5 out of 10, from what I've read about it.  My own personal bugbear was that all the Japanese were armed with allied weapons.  Despite the treatment of the prisoners being very bad, it seems that is was short of what really happened.  One good thing is that the Japanese all speak Japanese and are not subtitled.  In terms of it's representation of WWII I would say that the first third is the best (where the prisoners are at the camp and the battle of wills between the two colonels takes place) and it gets weaker after that.  The weird section where the two colonels leave the bridge without any other soldiers and attempt to prevent the bridge being blown up is odd to say the least, however it does work within the scope of the plot and the two people driven by principle into acts that are not what we would consider to be right.

The representation of women in the film leaves a lot to be desired, but I think it does come across that they were equally brave and served at great cost to themselves during the war.

Is it a good film?: Yes it is.  It was a very entertaining watch and despite bogging down in the middle third (where a shoehorned american character (William Holden) tries to get out of being part of the commando raid) it rolls along pretty well.  I certainly enjoyed watching it and would recommend it to anyone looking for a good film.