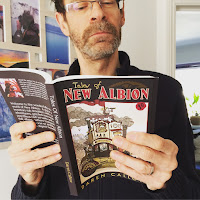 I realise I may be straying into controversial territory here, but I’ve been wondering recently about how much writer’s should be influenced by the consumers of their stories.  Let’s call them fans.  The reason for this musing has been the recent changes to characters in popular culture, for example Dr Who changing sex, Hermione Granger changing skin colour and, perhaps closer to my own heart, a myriad of revisions to the Star Wars universe caused by removing the creator from the creative process.  Not to mention various reboots, restylings and general appropriation of other loved stories and characters (I could mention Battlestar Galactica, Sherlock Holmes, Poirot but the list is considerable).

There have been howls of protest about all these things, but as both a fan and an author I can see it from both sides.  Certainly complaints that switching a alien character with two hearts that can regenerate at will from male to female is emasculating seems very wide of the mark.  After all there have been twelve white male doctors and one white female doctor so far, so even some sort of basic equality seems a lifetime away.  Other arguments that this is not really part of what is possible in this (entirely fictional) universe also don't work for me.  After all in the case of Dr Who there is certainly a precedent in the changing of the Master to Missy in 2014 (and presumably lots of other years throughout the whole of history), which I don't remember sparking so much rage, although I'm not really a huge Dr Who fan so perhaps I missed it.

The Hermione Granger (non) issue is even less of a worry to me, after all, as J K Rowling correctly pointed out, she never specified skin colour in the books and people do tend to project their own ideas on to things.  I often wonder whether people imagine all the characters in my own stories to be white, when I also don't specify this.  If I was ever lucky enough to have my books converted into some visual medium, I would be happy for actors of any origin to play any of the roles.  It matters not to me, but rather I would be more interested in the characteristics of how they were played rather than simply how they look.

And I suppose this is the answer to my musing, which is how good is the creative product, rather then the choices about ethnicity, height, weight, facial hair, gender etc... So is the new Dr Who any good?  There are arguments either way on this, but I have to admit I've watched every episode and, although perhaps I don't think it's hit the heights of some previous iterations (I actually really liked Paul McGann's interpretation, anything with K-9 and the original Dalek films) but I think I enjoyed them.  So even though the jury is still out it's a tentative thumbs up from me.  But then maybe I'm weird, I also liked John Malkovich's take on Poirot and the Battlestar Galactica re-boot.

Bottom line for me is that really it's the creator, writer or author's prerogative to do what they like with their characters and stories.  As much as fans may feel they know the fictional world that's been created, they all have their own ideas (and therefor prejudices). Everyone's synapses fire in different ways and only the writer's synapses can be right.  For better or worse.

In the meantime I would suggest that we all remember fiction is made-up, and just try and enjoy the ride.  If something isn't for you, then there is plenty of other stuff out there to enjoy.  Or you could write you own.  Did I mention that I have some stories you could try?  Go on, have a listen, and tell me how I should have done it.
Posted by Daren at 12:00 PM