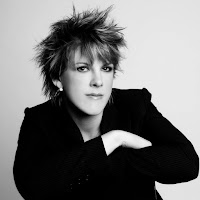 As part of the promotion for the new Tales Of New Albion steampunk electro-rock album, I managed to get hold of the talented composer - Charlotte Savigar - to ask her a few questions about the creation process:

How did you get into music composing?

After starting piano aged 7, it was obvious I had an instant love for this instrument and indeed music. I remember as a kid listening to composers such as Liszt and Chopin at my Grandad’s house and feeling incredibly moved and connected to the piano pieces I was hearing. I guess this was the catalyst that prompted me to sit down and start writing my own music.
I wrote my first solo piano composition aged 11, it was called ‘Pulse’ and I remember feeling really proud of my creation. I even performed it at a school assembly. From there I filled up manuscript book after manuscript book writing down as many ideas as I could.

I spend the majority of my time writing library music and every so often I will have a quiet patch where I’m waiting for my next project to begin. With this knowledge, my husband suggested that I write a piece of music for his next story (from the Tales of New Albion) that he was due to read at an upcoming Surrey Steampunk Convivial. After doing a little research about the steampunk genre I decided to create a victoriana / scifi sounding track that is now officially the ‘Albion theme music’. We were both very happy with the composition so Daren suggested that I compose more pieces to accompany his book. Over the course of about 10 months, he gave me more and more story briefs and I pretty much had free range to choose my musical pallet and get creative!


What is your favourite track from the album and why?

My favourite track is ‘Lost in the Great White’, I would describe this as ‘the serious track’ on the album! It took a lot of time to create this Asian sounding composition and the reason I like it so much is that it really moves me. I feel an emotional connection this piece and am very proud of the writing here.


Your previous releases were more song based, how was it working on an instrumental album?

I loved it! As much as I enjoyed and still do enjoy recording vocal music in the studio, I struggle so much with writing lyrics that on so many occasions it’s held me back. I realised towards the end of 2015 that I was losing the passion for writing songs and once I started writing library music I decided that this was where my heart felt whole and ironically I felt I could express myself more through instrumental music than through words.
With this album I had the opportunity to write for instruments I wouldn’t have ever thought of writing for in the past. In particular synths! They play a big part in the album and really create the scifi landscape I was trying to achieve. I felt throughout the whole project that I had the freedom to create whatever I wanted and as a composer that felt truly liberating!

Tell us something about your self that not many people know.

Apparently I’m a bus nerd! And I love to do impersonations!