[These are the new chapters of my sci-fi story written for the Daren Callow V. Nazi Robots exhibition which is at The Kitchen Window Gallery until 28th November]

I have a memory. It’s a beautiful autumn evening, the sort of wonderful reddish brown light you only find in England. I’m moving backwards. There is a broken teacup, pretty fine porcelain, a shard lying on the ground, I can’t pick it up I’m still moving backwards. The light is just so wonderful, auburn evening hues. I’m rounding a corner; there is a flash of light. The cup is broken in my hand: hot, brown liquid seeps through my fingers. The edges of the broken cup look so beautiful, crisp and white in this light.

A man appears around the corner. Bowler hat, dark trench coat, official looking moustache; he moves purposefully in an odd slow motion. He reaches inside his coat and pulls out a broom handle Mauser and starts firing. I see the shell cases ejecting, pulsing flashes of stark light. The teacup in my hand fractures and falls apart at half speed. Another shot, I’m moving. I don’t think I’m hit; my only thought is to get around the corner, out of line of sight. The cup is gone, it’s a shame I think. The light is just so exquisite. The moustache is still advancing, firing, but he’s lost me. I made it around the corner and I’m gone. Just the wonderful dusk light and the piece of the broken teacup.

I am not Captain Scarlet; I’m in big trouble. There will be no regeneration this time.

Ahead of me across a brown, arid, war-scoured dustbowls are eight war robots. Mark IVs, the very worst: sophisticated, merciless, hi-tech killing machines. Now I’m sweating badly beneath my splinter-camo cape, NBC armour and hastily re-placed respirator; sweat drips over my eye as I try to keep my rifle trained on them. They kick up dust as they move with rapid, lopping steps, but they don’t need to hide, they are masters of this battlefield. Mark IVs are the aces of killing, the ultimate inbred mechanical monster. They resemble an armoured mushroom, flat domed head balancing on an upturned fire extinguisher, a cylindrical ammunition drum on their back and a mini-Gatling gun for a hand. Their legs are spindly, but very strong, designed to be hard to hit, designed keep them in the fight. To let them kill you, before you can destroy them. Despite their mechanical brilliance, I have one advantage. They can’t actually see me, at least, not until I open fire. I’m lying against the bank of a sunken trackway, covered with a splinter-camo cape that means they cannot detect my shape, heat or light. Without these clues I’m just part of the background noise, just a shape in the dust. Fine if I can just let them go by on their merry mechanical way, but I can’t – they’re heading exactly the wrong blasted direction. Straight towards home. 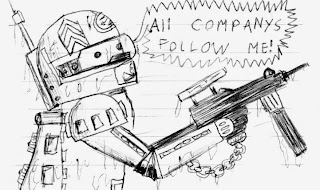 Since they burnt the ground, poisoned the air and shot down everything that moved out of the sky, we’ve been hiding. We dug tunnels into the rock, camouflaging everything and rebuilding what’s precious to us underground. Nothing lives up here so we have to make everything, even our food is 3D printed (and tastes like it). But they haven’t found us yet, and they are not going to do so on my watch. If only there hadn’t been eight of them! I’m kicking myself now (metaphorically) for lazily bringing only 4 rocket tubes. Four tubes - four kills, but there are eight, so somehow I have to shoot the other four, or they will kill me. Today. Right here in the dust. I blink the sweat away and try to refocus, the time of action is rapidly approaching and I don’t want to be thinking about it too much. Definitely eight of them, definitely going the way I don’t want them to be going. Right, that’s it then, let’s be having you.

Leaving my assault rifle on its bipod I pick up the first rocket tube. Tear off the safety strip, point it towards the first Zyke in the deck, deep breath, wait for the red LED to turn green – locked on: press down firmly on the trigger. The tube kicks slightly and a rocket streams out towards the enemy. I don’t even watch it; it can’t miss unless it’s a dud. I chuck it over my shoulder and grab the second tube, same drill – two away. Tube gone I grab the assault rifle, find a target and squeeze off two bursts until the droid in my sights buckles, fractures and starts to topple. That’s quite enough; I don’t even glance as I drag the rifle back into the sunken track and head stiff-legged to my second position. There are two flashes of light, and two bangs, I’m still ducking, running. It feels like an age until I’m at the second stash of rocket tubes. The rifle goes up onto the bank in roughly the right orientation; this will be my last stand, my Alamo. I throw off the splinter-camo, too late for that now, they’ll be on this position in seconds. The tubes are just as I left them, ready to go, safety strips already pulled on these two, I knew if I had to use them there would be no time to think. Out on the plain there is twisted metal, smoke and bursts of gunfire aimed at my first position. The remaining five monsters are heading towards that spot at full speed. Last two rockets are away and my hand is shaking on the rifle grip, waiting for a target. This time I watch the rockets all the way snaking through the air streaming smoke and fire. They impact directly on the body of the two robots targeted. I say a quiet thank you to whomsoever designed these great bits of kit. Four shots, four kills. Through the light and smoke of the explosions the remaining three are turning towards me. I bring up the rifle and start to fire, but I’m panicking, the shots miss, the robots know how to move and evade fire. 100 metres away. Bullets are zeroing in on me, I have only a few seconds. Fire again, maybe hit one, but it’s still going. They are ten seconds away, but their bullets are closer. At least I didn’t hesitate when it was my turn, at least I did my job. Take one more with you, I focus, squeeze the trigger, fire.

In a blaze of colour, sound, light the whole area of earth around the droids suddenly kicks up in every direction. The machines explode, freacture, splinter, flame. Cannon shells tearing ground, rock, sand and automaton alike. There is a screaming roar in the air and a collosal, darker than night aircraft powers over my head still spitting lead from belly mounted cannons, throwing dust in every direction. I am so shocked I can barely register it. The delta wing craft banks and circles round. In a second it’s a kilometre away from me. I’m watching it pull a high G turn banking elegantly to turn back towards me. It has no marking and it’s bodywork is so black it’s almost sucking the light out of the air. An arrow shaped black hole. Instinct makes me turn my eyes away, back towards the Zyke patrol, scanning with my rifle for movement. But it’s just so much scrap metal now, blown to the four winds and scattered across the scree.

The plane by now has made it’s turn and is thundering back directly towards me. Trailing dark smoke from it’s rocket exhausts, a black triangle growing in the sky. I wonder how it’s still in the air, not shot down by AA missiles like all our craft were. Nothing flies anymore, nothing. It suddenly occurs to me that I might not know if I am friend of foe. Frantically I reach up to my line-of-sight laser coms on my helmet and point it their way. “Send ID, Send ID” I try to say, but my mouth is so dry I can barely croak. Perhaps it worked though, the craft does a strange manouvere, it dips each wing in turn, a little wiggle in the air. It feels like it’s just for me. Then it suddenly turns and powers into a steep climb. I’ve never seen something so powerful , so menacing and yet elegant at the same time. I watch until all that’s left is a drifting smoke trail and with a gulp realise that it’s turned exactly the way the Zykes were going before I so rudely interrupted them: home. It knows where I live, and it will be there an hour or more before me.

Standing up with wobbly legs and sweaty hands, I shoulder my rifle and hobble painfully to retrieve my splinter-camo cape. My legs know the way to go, even as I fumble with the clasp I’m clumping stiff-legged on the way back to base. Somehow I have a feeling now the angel of death has arrived, this war will never be the same again. 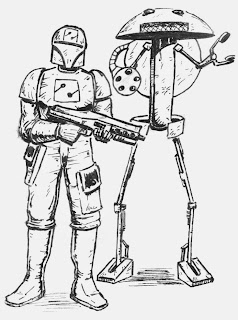