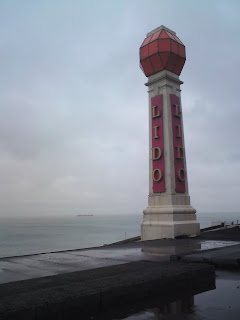 Wow, is it really only a week? This time a week ago I had just got home from the Faith! album launch in Margate. It really was an excellent night at the Lido - a fantastic old seaside night club. I got there nice and early and there was plenty of time for main man - Lee Robson - to show me to my guest room and let me prepare for my performance. When I got back to the venue the soundman had temporarily disappeared, but it was wonderful to see Luke Jackson and his dad Paul, as well as Charlie Savigar, who I hadn't seen for about 2 years!

Soon it was time to get underway, as the lights came down and the people came in. I was opening the night, so had to hit the stage running and get things moving. I opened up with I Need Your Love and then played The Fool I Am, After All and finished with the track off the album - Lightkeeper. It all seemed to go well, so I was pleased that I'd done my bit for the night and could relax and watch the other acts. In fact everyone rose to the occasion. The first half of the night belonged to the unsigned acts, with excellent performances from Dan Cropper, Kayley Weller, Billy & Laura Page (over from Texas) and Johan Nøkland Lund (over from Norway I believe). I must admit to be slightly biased but my own personal favourites where Charlie and her band, and the mighty Luke Jackson who played a storming, professional and passionate set, that totally belied his age!!

After a short break it was the chance for the TV talent to show their thing. I believe that Ben Mills, Shaughnessy and our host, Daniel Evans have been involved in some TV show called X Factor, now since I've never seen it, it's hard for me to comment, but they certainly went down very well. I think it's pretty safe to say that Daniel was the crowd favourite by a long way... his spontaneous jam with Ben Mills, was another highlight. Oh, I almost forgot even my mate Eddy Johns managed to make it and perform a short set. Before we knew it, it was all over, just time for a group photograph and it was time to head to bed. I must say it was a very enjoyable and worthwhile project and I loved being part of it...

...but it's not over yet. This was, after all, only the launch of the album, now it's over to you. We are very pleased to say that the CD of the album is now available to purchase for just £9.99 with free postage in the UK and postage of only £1.50 everywhere else in the world. The CD has 18 tracks that have been donated by the artists and professionally packages and produced. My own track is a unique version of Lightkeeper that you can't get anywhere else, and there are also tracks by Luke Jackson, Charlie Savigar, Kayley Weller and Eddy Johns as well as many others. Even if you don't like all the tracks you should still buy a copy. As I said to a friend of mine, it only needs one of the artists to "make it" and you got something really valuable and special - and even if they don't you are helping a great cause. All profits from the sale of the album go to the Cystic Fibrosis Trust.

So don't delay, Christmas is coming, so treat yourself and buy a few extra copies for your friends!!

I'm off now to host a night at Prohibition (Sunday), and then there will be another post on Monday when I have an exciting announcement. So come back then!! 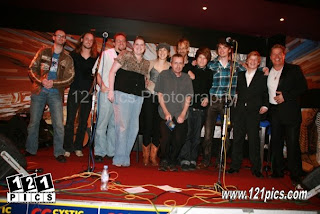