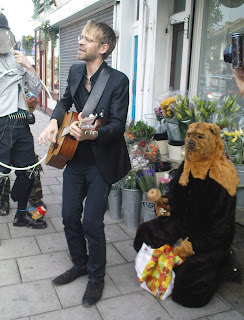 Yesterday I was playing as part of This Happy Band an art project / pub crawl arranged by Daniel Lehan as part of the Nunhead Festival. It was certainly a fun and slightly surreal experience. We all gathered outside the Old Nun's Head pub near Nunhead Green and what a motley crew we were. There were pirates, musicians, a human percussion instrument (also known as Calum F Kerr), a laughing bear, a pantomime horse, a poet or two and a man dressed head to toe in camouflage as a kind of latter day Greene Manne. We collectively clattered and strummed our way around three pubs performing as we went. Frog Morris chipped in with a poem or two (mostly about beer), I performed a few songs as did Tim, and Mr Solo. There were many highlights to the day, but the performances in the Nunhead Community centre, and our impromptu appearance on the festival stage certainly topped it off. There is a small video clip of this on YouTube: the saxophone player is Viv and the ukelele is played by Tim.

We all ended up in the Man Of Kent for one more performance in front of the bemused locals. My version of Do You Want To Dance? was nearly drowned out by miscellaneous percussive noises. We all performed a final item and then relaxed with a few well deserved beers.

I'm just about recovered now and doing some practice before tomorrow's gig at the Camden Head - if you are free come along from 9pm - 100 Camden High Street.

Casdok: It certainly was, and we might be doing it all again another time.