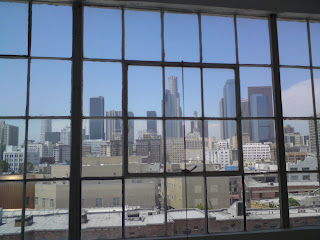 I'm back from LA and just about in one piece. Well apart from a severely bruised finger (I shut it in an industrial elevator door, yeah it did hurt). The last two weeks have been saturated with a host of experiences and emotions, way too much to document in detail, so here are a few snapshots (in no particular order, just as they come to me).

Waking up wedged into a airline seat, surprised to find that I've actually managed to sleep. Foolishly I start to watch another movie. Anyone know what happens at the end of The Boy In The Striped Pyjamas? I can't help feeling it can only be bad. Just before we land I can swear that I hear the pilot say, "We hope to see you on another virgin soon".

Sitting on Zuma beach in Malibu, watching the sunset with Alex. I'm eating a picnic off a china plate with a knife and fork. Very civilised.

Walking downtown in LA in searing heat (they had a Spring heatwave just for me, it seems). It's a mixed area of very run down shops and beautiful old theatres. I walk for about 2 hours and am astonished to not see one MacDonalds.

Standing in a huge empty loft in the Toy District of downtown LA. Our voices echo around the walls. The view of the commercial district is stunning.

Trying not to laugh when a slightly camp real estate agent tells us that the apartment block we are viewing has a "breezeway".

More walking, this time on Sunset Boulevard and Hollywood Boulevard. Checking out the handprints and the walk of fame. Is this the true mark of having made it? Curiously it kinda is just how I always imagined it would be, although I am slightly disappointed I didn't see C3-PO's footprints. There is a man dress up as Homer Simpson, apparently this is how he makes his living.

Watching the homeless people make camp for the night in the road next to our loft (whilst trying to avoid looking at the stuffed snake and mongoose diorama). There is a mission and a Police station just around the corner. It seems that they are allowed to sleep on the streets from 9pm to 6am. Prior to Hurricane Katrina the city aggressively moved them on, so I am looking at social progress (of a sort). It turns out we are actually living on Skid Row!

Champagne by the pool in the Standard Hotel on Sunset.

Wandering the lot at Rent-A-Wreck. They've told me that they rent cars to the movie industry. There is a green convertible Jaguar just like the one in Memento. I don't ask if it is the same one, I don't want to be disappointed. In my mind it is.

Getting lost in the LAX airport complex on the way to the car park. Twice.

Looking down in the blazing heat on the whole of LA from the observatory in Hollywood Hills. Wondering what would happen if there was an earthquake right now. Trying to take a picture of us with the Hollywood sign in the background. Failing comically... most especially when the passerby who volunteers to take the picture for us manages to get it right behind our heads.

Brunch (Dutch Babies and Mimosas) with a number of young defense attorneys in the suburbs of LA followed by table football (my team loses 1-2, but it's pretty close). Their descriptions of gangs and crime in the area makes Thornton Heath seem very safe.

And yes the end of the film is bad :(