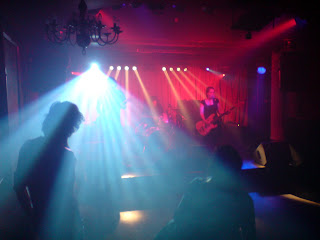 Three gigs in as many days, but not all my own this time. Monday night I was at the inaugural RAW (Real InterActive Writing) workshop and open mic night at the Abbey Tavern in Kentish Town. It was my first time there and I was highly impressed not only by the standard of contributions, but in the energy and attitude of the performers, next one is the first Monday of February, I expect it to go from strength to strength this year.

It's Tuesday night and I'm heading through the extreme cold to a venue I've not been to in a while. All I really remember about playing and seeing bands at the Water Rats is that it's extremely loud! Well I wasn't disappointed. I went to see Thick As Thieves (pictured above) perform and they did not disappoint either. Their sound is a combination of Iron Maiden, Nirvana and perhaps shades of Guns N Roses but with an inventive twist or two. They seemed to be reading my mind through the evening, as no sooner had the thought "oh they should get the drummer to join in the harmonies" enter my head, but Lo! it was done. Okay smartarses, I thought, where are the quiet bits to go with the in yer face noise - and Lo(2)! a quiet vocal section ensued. There were other examples of this, but I can't remember them now. All in all it was certainly enjoyable, and above all LOUD! In fact they have subsequently informed me that their middle name is Loud (which I guess makes them David, David, Loud and Emma - or perhaps Thick As Loud Thieves - not sure) - which means that I will probably have to make my middle name "Earplugs" next time I go to see them play.

On Wednesday I went to see the Lost And Found Orchestra at the Southbank. This is a big show from the people that brought us Stomp, and I have to say it practically defies description. Within the show are elements of music, dance, comedy, theatre and, er, DIY. It's quite a spectacle and I thoroughly recommend it.

There are too many shows coming up to mention here in detail so I'll mention just three and list them all at the end.

On 26th January I am very excited (and slightly nervous) to be performing my interpretation of the Shrek Rap by fellow blogger Casdok. This will be at the book launch for From Zaftig To Aspie (details below) written by DJ Kirkby whom you will probably also know from the Blogging sphere. I don't want to give too much away about my performance, but it will be combining elements of my live show (most notably looped pieces like The Prophet) with a spoken word delivery that (at the moment) seems to be somewhere between Lou Reed and Baz Luhrman! Whether or not a recorded version of this track will ever make it into the public domain is uncertain, so if you really want to hear it - you'll just have to be there!

Very early notice, but on the 12th March at 2nd Thursday at the Montague Arms, I'll be performing another interpretation of a written piece. This time it's a piece by Daniel Lehan.

Finally, please, please, please consider either coming along to, or texting your support for my Surface Unsigned Festival 09 appearance - I need say no more!

Happy New Year to you all!

I've been thinking about the Lost and Found Orchestra ... will have to commit to it now. x, c

Your busy! Im even more excited now to hear your interpretation of my rap! So yes i will be there! :)

Happy new year to you!

Clarissa: Yes, do it! Thoroughly recommended.

Casdok: Happy New Year to you too... it's certainly working up into something... lots more work to go though.

Come on, someone must record it for posterity!!! (and so the rest of us can hear it :))

I am so impressed with what you've done in your performance of the 'Shrek Rap'. I feel incredibly honoured that you and Casdok are giving your talents to help promote Autism awareness at my book launch. xo

HMC: Well there is already talk of a CD version, and possibly a video, so it may just be a matter of time... best to see it live if you can though!!

DJK: My pleasure, I hope it all helps promote the book and the cause!

I'm really hoping to be at DJ's booklaunch...just depends on work and kids! I hope to see you there!